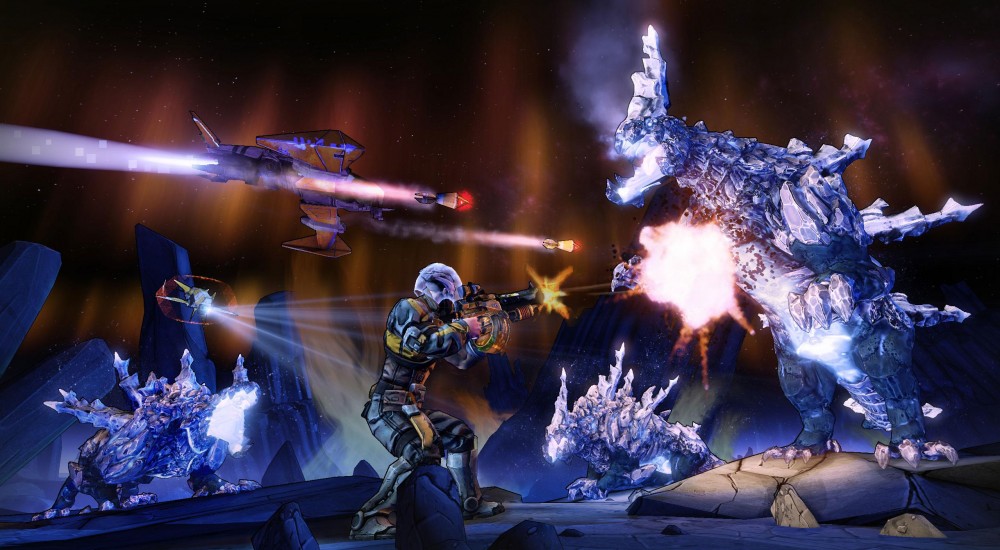 The second episode in "The Making of Borderlands: The Pre-Sequel" series has been released by Gearbox on Youtube. New gameplay footage of the new moon environment and combat mechanics show off a bunch of what fans of the series will be dying to try out come this fall.

In Borderlands 1, you see a giant moon hanging above in the sky, nothing to out of ordinary. In Borderlands 2, however, the moon is more rugged and cracked, with lava flowing all over it and massive Hyperion space station looming overhead. What happened on the moon between these two games is exactly what this pre-sequel will allow players to explore for the first time. It's been a big request from the fans out there, so Gearbox is giving it to them.

Due to the low gravity on the moon, players will gain access to a whole new way to experience Borderlands. Being able to jump very high with a slow descent allows for a variety of ways to explore the maps and experience combat. One of the special maneuvers players can do in the air (or lack thereof) is a "ground pound" attack that does a bit of damage to surrounding enemies and knocks them a short distance away. Finally, there are a couple of new weapon types to use among the bazillion gun's available in the Borderlands games. Much requested laser guns will be making an appearance, as well as a new cryogenic element type to freeze enemies and smash them into ice shards. This new element adds new fantastic mechanic to combine with the previously mentioned ground pound move to get this affect.

Borderlands: The Pre-Sequel releases this October 14th on PS3, Xbox 360, and PC (with the possibility of a PS4 and Xbox 360 release at some point).