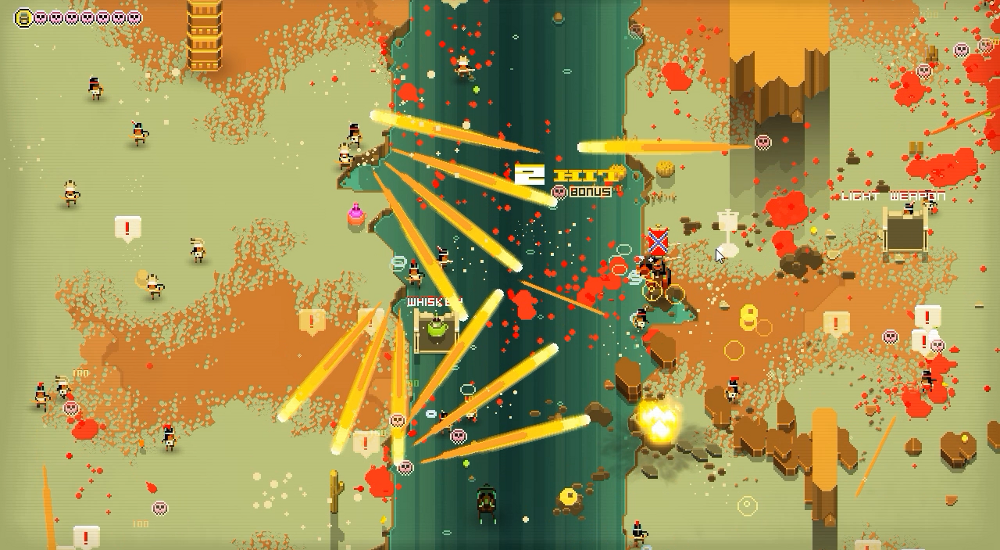 A few years back, developer FarmerGnome released a freeware game called A Fistful of Gun. The top-down shooter was inspired by classic NES-era shooters like Gun.Smoke, updating the bullet-heavy action for modern players who demand more shooting, more things to shoot, and more close-ups of mustachioed protagonists.

The story starts with the evil railroad baron Clayton Boon trying to build a track leading straight to Hell. Nobody else has done it, so he'll totally have a monopoly on the hot coal importing marketplace. Before he can lay the first track, a crazed shaman with a posse of psychopaths raised from the dead (you read that right) are going to stop him. Fighting across the wild west, it's nutjobs versus corporate greed with enough shooting to qualify for a whole fistful and a half of guns.

Players choose from a roster of 11 unique gunslingers and can go it alone or work with local/online teams of up to nine people. Each character has slightly different controls to master, with some requiring precise gamepad input while others are fine with mouse-based controls. There are also horses to ride, rivers to forge, trains to hop across, upgrades to purchase, and a special "drink"-induced special attack! (Hint: the drink isn't milk.)

The beefed-up A Fistful of Gun is heading to Steam Q2 2015. In the meantime, sneak over to FarmerGnome's site and play the old alpha version of the game.