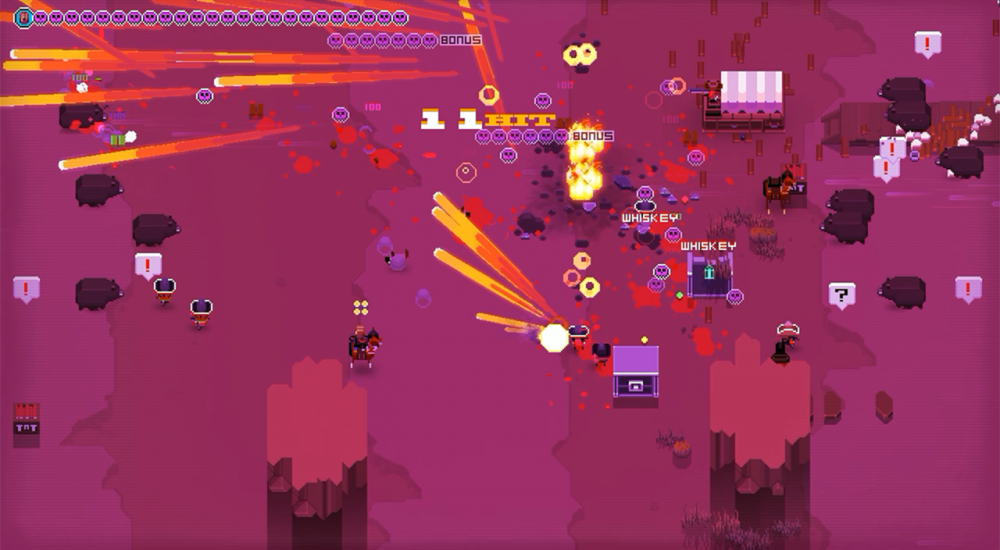 Of all the settings (both real and fictional) to justify the use of the terms "Bullet Hell" and "Shoot Em Up", I'd say the Wild West ranks pretty high.  Though A Fistful of Gun doesn't seem to map directly onto either of those genres, its combination of the two makes me wonder if there's even another contender for "Most Viable Setting".  Of course, these types of games have begun flooding the market as of late, so what makes AFoG so enticing?

For starters, let's take a look at the co-op.  What's that?  Well yes, dear reader, that does indeed say nine player co-op.  That means you plus eight of your closest cowpokes can take on all the ne'er-do-wells the frontier has to offer.  Outside of MMOs, I can't say that I've played too many co-op games with more than about six people, so I imagine things get frantic quicker than an [INSERT WILD WEST COLLOQUIALISM].  Let's check out the trailer to see how accurate that is:

You probably caught it in the trailer, but AFoG brings another unique twist to the table.  Each of the eleven characters have their very own control scheme to master, presumably to allow nine sweaty gamers to crowd around a single PC in local co-op.  If you'd prefer to keep foreign bodily fluids to a minimum, though, the game also offers an online alternative.

A Fistful of Gun drops into our loving arms on September 24th.  It's been a long journey from the game's roots as a freeware project, and it looks to be worth the wait.  To close this article, I'd like to present a quote from Devolver Digital's CFO:

“I’m not legally allowed to promote a drinking game that involves a shot of tequila each time another player gets the drunk power-up during A Fistful of Gun co-op games but that would be pretty solid.”