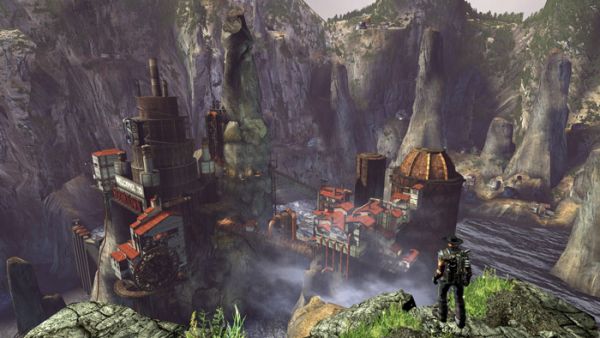 It's really no secret, we know you've been logging away hours on Gears of War 2, and want something fresh but similar to feast on. So - what if I told you that Codemasters, the creators of some interesting sleeper hits, such as Overlord, and Rise of the Argonauts, has announced a game that boasts to be similar to Gears of War 2, but let you wear more cowboy hats and draw pistols Wild West style? You know you're at least a bit curious.

The story is one of corruption, the apocalypse, and a lone(ish) gunman out to reveal the truth behind “the corporation” in a western style third person shooter. To me, this looks like a happy mix between Gears of War, and Fallout3 – but I suppose only time will tell. A preview from Videogamer.com tells us:

Damnation is set in an alternate American history in which a 40 year conflict has waged between the Nationalist and the Coalition forces, draining the country of its resources. Players take control of Captain Hamilton Rourke, a member of the guerilla resistance force known as the Peacekeepers. As a veteran of the Great War, Rourke has his own personal agenda against the PSI and embarks on an epic journey to reveal the sinister truth behind the corporation and save the country from damnation. So, the apocalypse thing has been done, but we get the happy alternate world with cowboys - so, how about the gameplay? Watching the trailer (posted below), we see a whole lot of third person action, reminiscent of our beloved Gears of War! In the early stages, it's hard to tell how this one will roll out – but co-opers can be sure to have some interesting game time, since (and I quote) this game will:

"feature two-player co-op locally, online and over LAN - which Blue Omega was focused on though, instead they were keen to highlight how well the vertical gameplay translates to multiplayer action.”