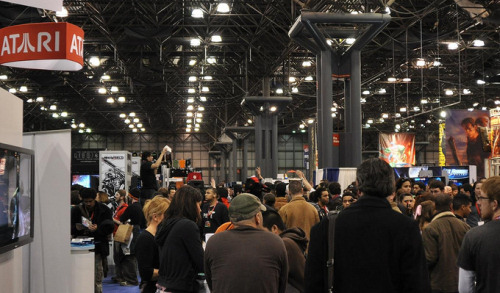 We've almost come to the end of our NY Comic-Con coverage.  With so many games on the show floor, we didn't have as much time as we wanted to to go in depth with everything.  But...we tried our hardest to play what we could.  There's two more games I wanted to briefly talk about,  both have cooperative play.  Both games also couldn't be anymore different.

On one hand you have this sort of steam punk western style shooter...and on the other you have this gorgeous space flight MMO.  I'm talking about Damnation and Jumpgate Evolution Damnation was a game we recently covered, coming from publisher Codemasters.  We got a small taste of what to expect from our preview, but we got a larger taste of the game at the NY Comic Con.  Unfortunately this game needed a lot more salt and pepper.

The first problem with the game was it was set up wrong on the TV, it was obvious it was set in a non wide screen mode and stretched to the TV, so that didn't help our impressions.  It looked like it could be graphically impressive, but it was tough to tell.

Movement of the main character felt clunky, almost sticky as we navigated this alternate American history.  We were tasked with taking down some supports to build a bridge across a chasm.  The game play felt like a mix between Tomb Raider and Gears of War.  You could run and jump, grab onto ledges and shimmy around.

With any western style game, the gun play should play an important role - unfortunately the guns just felt weak and useless.  I was shotgunning guys at close range with little to no feedback from the game as to whether I was actually hitting them.

With a supposed April release date, we hope Damnation stays in the oven a bit longer.  There's some potential here for the 2 player co-op shooter, but it definitely needs a lot more lovin. Another game in the Codemasters booth that immediately caught our eye was a space sim called Jumpgate Evolution.  I saw caught our eye because the game is simply drop dead gorgeous.  If you thought games like Homeworld and Eve Online were impressive, wait till you see Jumpgate.

The game is an MMO, including subscription fees, that takes place in a gigantic universe.  Players can build and customize their ship and head out on missions with other players.

Jumpgate controls with a mouse and keyboard, something akin to Freelancer, and it seems to work well.  I was having a blast trailing a target and firing away.  Explosions are gorgeous only to be further improved by a little XP increase notification.

I generally have a no MMO rule, because the games tend to suck way too much time from my other gaming rituals, but I just may break it for this one.  Even though we don't cover them on this site, heck it would be a whole site unto itself, MMOs are inherently co-op.