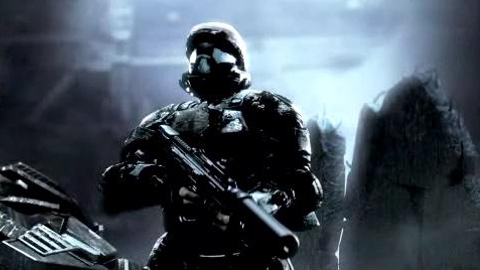 Blake "Broodax" Corner's Great Features in Co-Op Gaming couldn't have landed at a better time. Hot off the heels of this season's Saints Row 2 and Mercenaries 2 releases comes the news that Halo 3: Recon will feature open-world gameplay for a significant portion of the story mode.

CVG reports that New Mombassa will be partially explorable as the lead character searches for clues surrounding the events teased in the Prepare to Drop trailer. Gameplay will consist of these exploration segments tied together with linear flashbacks more reminiscient of Halo 3's levels.

Players will be able to control different members of the ODST squad, including the now-famous "Rookie" (pictured above), who is being voiced by Nathan Fillion of Firefly reknown.

Click "Read More" for some choices quotes from the article and from Bungie's Joseph Staten.

The goal is to find and investigate the last known locations of your four ODST team mates, using the new 'Visual Mode', which as shown in the debut trailer highlights enemies an items with a hi-tech neon glow, to path your way though the moon-clad metropolis.

Once you reach one of the last-known waypoints of your four teammates you'll find a crime scene - such as a sniper rifle hanging from a street light - and enter a Lost-stlye flashback to earlier that day, where you'll control the squad member for an entire level.

"It works just like any detective show, Cold Case or Law and Order or whatever, where a detective can arrive at a crime scene, look at the chalk drawings and bullet holes and see what's going on. He hears some echoey voices and the camera crossfades and now you're at the scene of the crime two hours ago."

It's unknown so far how the previously confirmed 4-player co-op will affect the campaign, but we're hoping for a similar experience to Halo 3. Keep your eyes to Co-Optimus for updates on the Halo 3: Recon campaign.