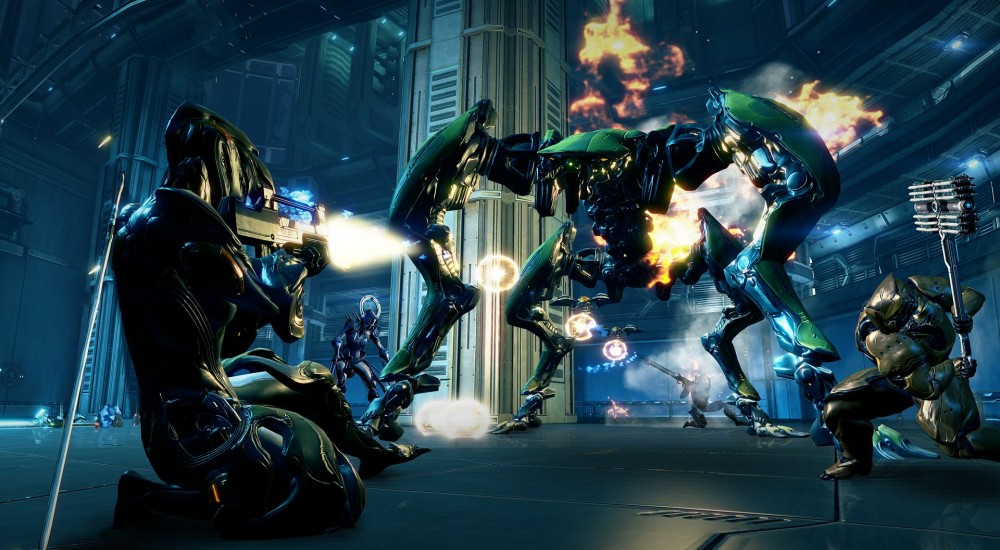 Another big update for the ever-growing free-to-play action game Warframe! Titled "Archwing", this release lets us take our ninjas out for some shipless free-floating space flying! Oh, and there's some new weapons and quests and stuff, too. Mumble mumble.

Let's talk about those Archwings, shall we? These handy doodads allow all of the fantastic combat action to take place in space without a ship, just like in that story you wrote when you were eight. The technology also adds new weapons and abilities to your arsenal. Accompanying space combat are two new quests, a new magician-like Warframe, new weapons and a new ice planet tileset. Also, these:

NEW REPUTATION SYSTEM – Represent one of six Syndicates to unique rewards as your reputation increases! Wear your Syndicate’s Sigil with pride in missions to earn reputation and proclaim your loyalty.

NEW WEAPONS -- Devastate opponents with the OPTICOR, a powerful new laser cannon.  Bludgeon enemies with the HALIKAR, a jet-powered throwing mace that always returns to its master.

NEW CUSTOMIZATIONS – Adorn your Warframe with intricate body art with all-new Sigils.   Customize your Archwing with Mods and colors. Give your Soma a new look with the Huntsman Soma Weapon Skin!

NEW ENEMIES – New types of enemies equipped to fly in space present new challenges in Archwing combat.  The Grineer have also emerged with a new enemy to tame your pet Kubrow.

The Archwing update was released for PC players October 24th and will reach Xbox One and PlayStation 4 in another couple of weeks. All versions support online co-op that encourages players to join up with as many friends as possible for truly epic battles and wins. Some of the other recent updates have added extras like pets, Excavation missions, and a revamped mod fusion system. All the better to keep you hooked on the free-to-play space combat, don't ya know.