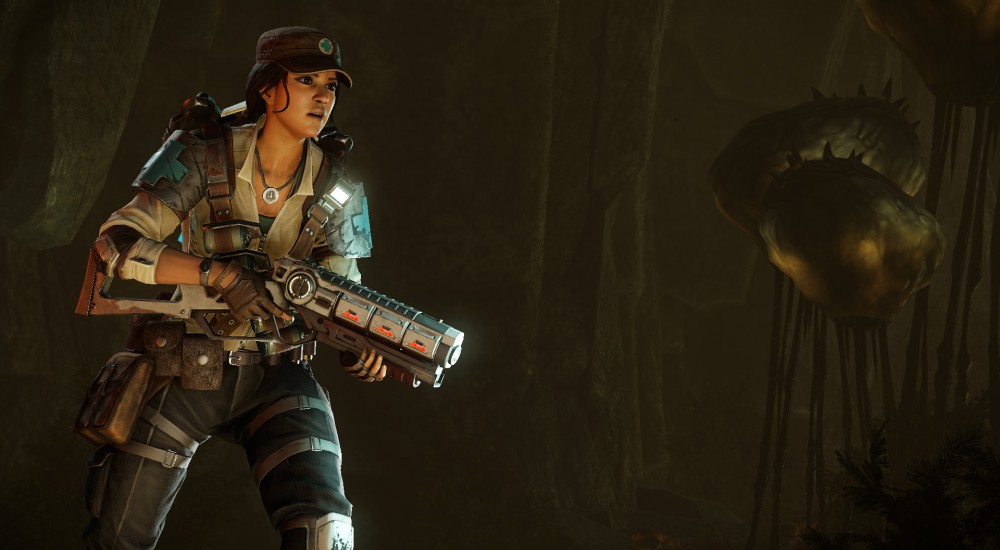 Turtle Rock Studios revealed some new information about one of the Hunters players can choose to play as in Evolve. We welcome the third Medic character, Caira!

Known as "The Scientist", Caira adds many interesting elements to the Medic Hunter class. Being that she's great at keeping the team alive with her main healing abilities, she's also great at keeping the Hunters moving quickly to the Monster and dealing extra damage when needed. Of all the Hunters available to choose from, Caira is one of the most versatile, using both her team support and combat abilities to their fullest.

On a more plot perspective, she's the smartest of all the Hunters you can choose from, looking to discover what the Monsters are, where the originated from, and what they want as a species. This character trailer shows off her stuff:

Caira’s grenade launcher fires generyst grenades, healing everyone in their splash radius. Including herself! If Caira is near her target, she enjoys the replenished health making her the only medic who can directly heal herself.

Thunk…BOOM! Fire! If Caira hits the Monster with her napalm grenades, the Monster takes damage on impact, but even if she only lands a grenade near the beast, she’ll still light it on fire, doing damage over time.

Faster, faster, faster! The Adrenal Boost gives nearby hunters a huge speed boost, which means a very surprised Monster at the start of the game. It also means, when she needs to get away, Caria is almost impossible to catch. The key in playing Caira is knowing when to switch from healing your teammates with the Healing Grenades to doing tons of chip damage with the Napalm grenades. In conjunction with her Adrenal Boost ability, the Monster should have a more difficult time keeping away from the Hunters assault. Does Caira look like the Evolve Hunter for you? Let us know what you think of her in the comments!