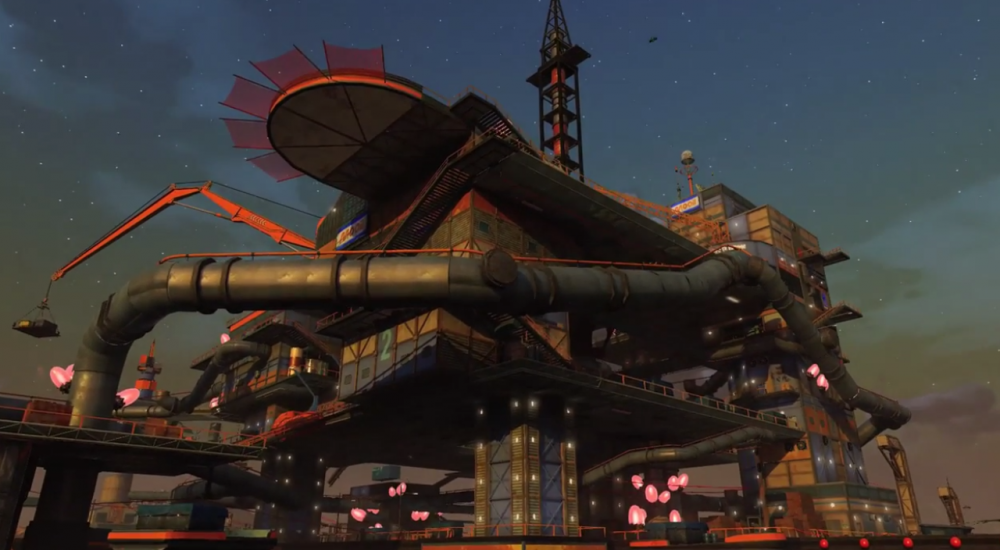 Players have been having a blast moving throughout Sunset City, killing any and all pesky mutants in sight. We are happy to hear that the first DLC to hit Sunset Overdrive will be here just before Christmas this year!

The "Mooil Rig" DLC, arriving on December 23rd, will be bringing all new missions, challenges, character moves, weapons, and a ton of other bonuses like traps, Amps, Chaos Squad objectives, etc. The setting of the DLC takes place on a giant oil rig far off the coast of Sunset City, where disgruntled rig workers and aquatic creatures have engaged in a bloody turf war. The two new moves used for movement will be much more suited for moving across water, in particular. The oil rig setting of this DLC will have lots of it, so it's crucial for players to learn these moves quickly and effectively. Water Dive allows players to dive into water for a short period of time, while the Water Slam Bounce has players dive underwater and shooting back out with a powerful uppercut attack into the air. These should help to eliminate the slowdown from before when landing in water.

The video below from Sunset TV, hosted by Microsoft's own Larry Hryb, made the DLC release date announcement, along with hinting at more parts to the DLC to be revealed later. One of these items is stated to be a really powerful weapon, possibly called a "Rivet Gun"? Stay tuned for more!