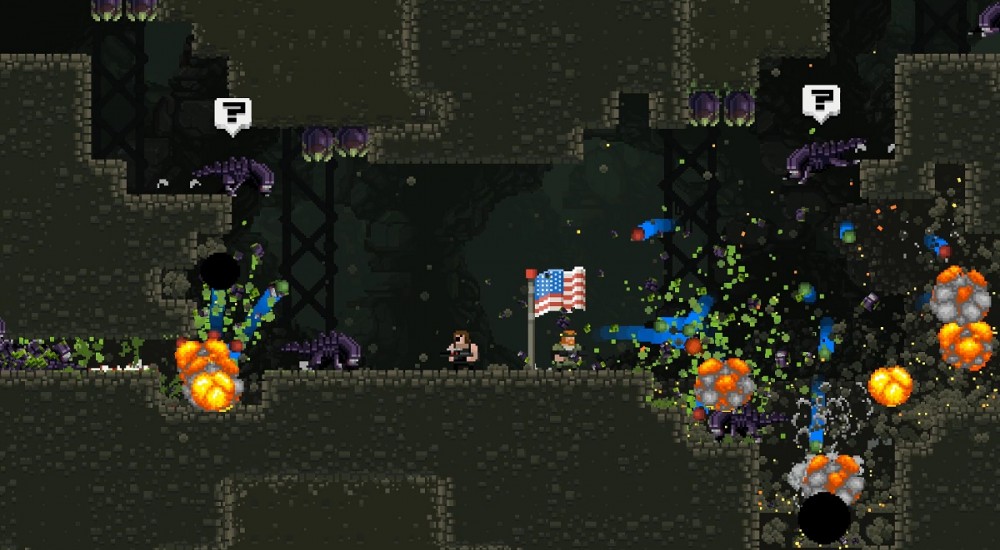 Broforce just received a ton of new content in its 'Alien Infestation' update over on Steam. This is said to be one of the largest updates for the title to date, and we can't imagine why.

In this update, players will fight to protect the people of Earth against an invading alien force, many which look like they were very much inspired from legendary sci-fi franchises such as Alien and Dune.  Many of  these aliens can climb up walls, crawl along ceiling, and feed on human characters just like their movie counterparts, so players best be on their toes while running and gunning.

With it, a whole new alien infestation campaign mode can be accessed, where up to 4 players must fight through while dealing with aggressive alien creatures. New enemy aliens (such as Facehuggers), along with an assortment of new traps and a few new boss fights (a giant sandworm), players should have a blast.

"This is our biggest and most challenging update yet, and we're really excited that it's finally getting into bros' hands," developer Free Lives' leader Evan Greenwood stated. "Considering that it's only two months late, we're decidedly improving at delivering content." "The whole team is hyped to hear everyone's feedback, and to use that to shape the direction of the next few months of development."

For a limited time only, Broforce will also be available for 25% off on Steam Early Access to celebrate both Alien Infestation's release and Expendabros being downloaded over 1 million times. Grab the game for only $11.24 now until Monday, February 16!

More Alien Infestation content will be coming in the future, so if you like this update then just you wait! They already teased one of the boss fights in the next update too, looking like an Aliens Queen.