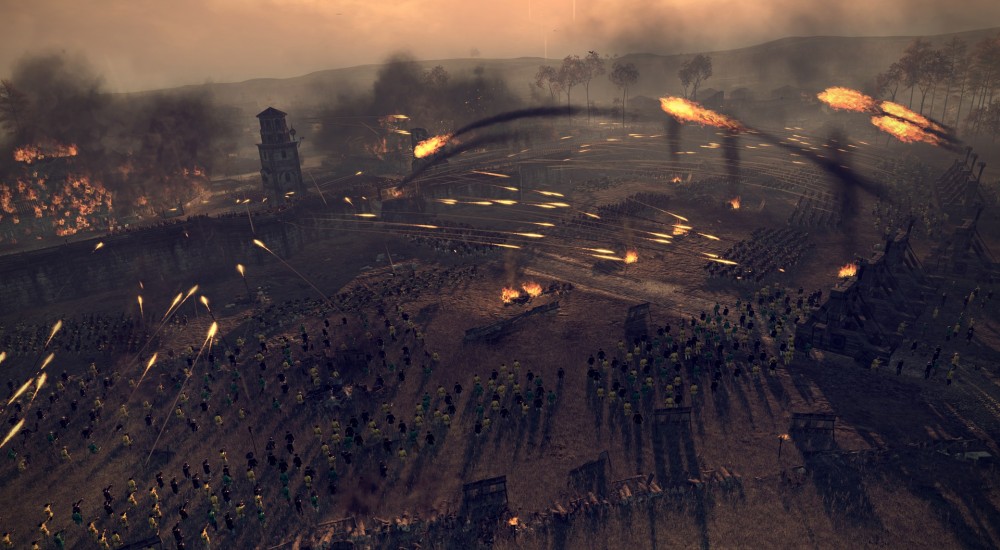 Let me set the scene for you.  Two scouts, ravenously hungry, sore from hours of blocking, swinging, and scrambling, sit by a campfire.  No words pass between the two.  The only indication an outsider could use to surmise their relationship is the passing of a wooden cup of water every now and again.  They are staring into the waning flames when a sound echoes in the distance.  Horns.  The savage horde of mongrels they beat back just hours ago is somehow on the move again, but how?  It couldn't be...unless their worst fear is being confirmed.  The mood darkens as the two realize their fight is unwinnable, that there is no victory when one is faced when an unending tide of bloodthirsty, half-crazed warriors.

Now you too can experience antics just as wacky as this, as Total War: Attila is out now! Fans of the Total War series in recent years are likely aware of the inclusion of a two player co-operative campaign mode dating back to Napoleon: Total War.  As expected, the mode makes a welcome return in Attila, with both players presumably learning how to hold each other and cower under the might of history's most infamous conqueror.

While the campaign map will remain close in size to the previous Total War entry, Rome 2, the geography will be obviously be focused more on the Hunnic bands of nomads and their historical "stomping grounds".  Other notable changes include the addition of "Province Capitals", regional cities that contain more building slots and begin with some form of walls, and the re-introduction of the "Family Tree" mechanic, which developers say is included due to the more scaled-down focus of Attila.

If you and a friend feel like rampaging all over Antiquity-era Rome and introducing your own unique version of the Dark Ages to Europe, Attila is definitely the game for you.  Alternatively, in the off chance you feel like your relationship with your buddy just isn't strong enough, nothing brings two people together more than the idea of inevitable death by stampede.  Not that I speak from experience or anything.