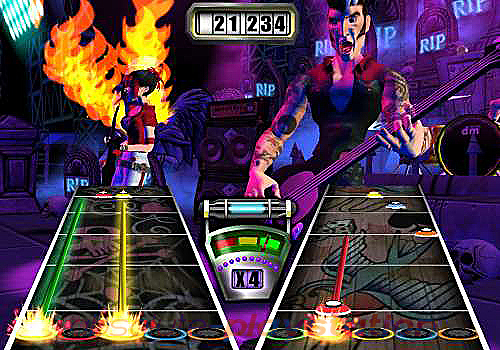 The event discussed in this week's This Week in Co-Op didn't really happen this week.  It was more like two weeks ago.  Hopefully, it's still worth reading.  We pulled out an oldie but agoodie as far as co-op games go: Guitar Hero II.  Why this game?  And is it still worth playing in this age of four player full band rhythm games?  Read on and decide for yourself...

I'll come out and admit it: I really like achievements.  You might think this is unusual, for a casual gaming type of fellow like myself.  Something about them, though, really appeals to me.  Perhaps it's the old school gamer in me, crying out for the long lost age of putting your initials next to your high score.  (I'm the gamer former known as MLA , now usually going by DAD.)  Plus, well-done achievements add value to the game, even after you already "beat it".  Looking through my achievements list one lazy Saturday afternoon, I came across Guitar Hero II.

Seeing my achievements reminded me: there was one last song I had to beat on Hard (before unlocking the real last song, Free Bird, that is).  Something about Carry Me Home just makes my fingers spasm.  I popped in the old GH 2 disc, and went straight to practice mode.  I was going to get this song, today, no matter what.  Valiantly, I played for about 20 minutes.  So far, so good.  I was able to pick the speed up a notch, slowly, of course, but still, progress is progress. A guitar controller with a wire!  How quaint.

Now, in our home, playing any music game is like a siren's call to a desperate sailor.  Son #1 and son #2 come running in, seeing what poor ol' dad is up to.  Needing a break anyway, I told #1 to grab his new fancy pants GH WT axe, and try it out.  Of course, we opted for co-op mode, and fired up Monkey Wrench to warm up.  He took lead, I took bass/rhythm/the other one.  Hard difficulty felt just about right, and away we went.

After a few seconds, achievements started popping up... for my son.  We did all of our GH2 playing before he had his own gamertag, it seems.  I'm sure you can figure out what we did next: earned as many additions to his gamerscore as possible.  In no time at all, the cheevies were flying by.  I could care less that I already had the achievements, it just felt good to be playing these old favorites.  We had played them so often before, but it was fun to do them all again.

There is certainly something to be said about downloadable songs for modern music games, and the enormous library you have for your perusal these days.  Playing GH2, though, reminded me of how important the setlist was when it came out.  GH1 had some amazing tunes, for sure; I still miss playing Cowboys from Hell.  But consider the powerhouses in GH2: Shout at the Devil, You Really Got Me, Carry on Wayward Son, Monkey Wrench, Sweet Child of Mine, Crazy on You, YYZ, and my favorite on the disc, Hangar 18.  Folks, I daresay if the setlist hadn't been so fantastic, we may never have had GH3, to say nothing of Rock Band.  Would a news story like this, where thousands of songs are promised as music game DLC, have ever happened without the incredible songs featured in GH 1 and 2?

Who knows?  And, in the long run, it probably doesn't matter.  I'll tell you one thing for sure, though.  That lazy Saturday afternoon, playing through the songs that made me absolutely fall head over heels for music games, was one of my best gaming experiences in quite some time.  Is it too soon to be nostalgic for a game that first came out a mere two years and three months ago?