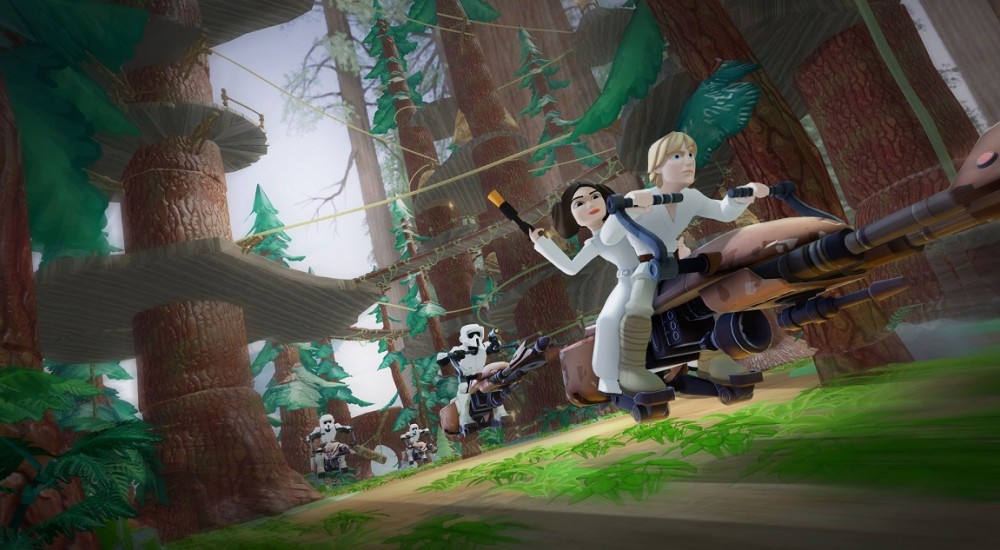 Disney confirmed that another installment in the Disney Infinity series is already underway. Disney Infinity 3.0 will be launching later on this year, with a huge focus on Star Wars content.

It's been a long time coming, but soon Disney Infinity fans will have Star Wars figures, playsets, and content coming in the upcoming sequel to Disney Infinity 2.0. As we all know, Star Wars: The Force Awakens will be released in theaters later on this year, and Disney has the perfect timing with Disney Infinity 3.0 and its putting Star Wars content in the limelight. This time around, there will be three different playsets spanning the entire Star Wars history. Get ready to travel the universe with epic spaceships and duel with flashy lightsabers in this upcoming iteration. For starters, the "Twilight of Republic" starter set will include Clone Wars style Anakin Skywalker and Ahsoka Tano, along with Obi-Wan Kenobi, Darth Maul, and Yoda. Expansions like the "Rise Against the Empire" playset will include Luke Skywalker, Princess Leia, Han Solo, Chewbacca, and Darth Vader. As of right now, however, details on the  on the third The Force Awakens set has yet to be announced (for obvious reasons).

Of course, Star Wars won't be the only new content coming to Disney Infinity 3.0. Tons of new Disney, Pixar, and Marvel additions will also arrive in this title, expanding the series even further than before. Some new Disney characters include: Mickey and Minnie, Mulan, Olaf, Sam Flynn, and Quorra will be released at a later date. On the Marvel side of things, fan favorites Ultron and Hulkbuster Iron Man will be among the many other Avengers characters to come. Due to feedback from the community, a few changes to this edition will be implemented. First, the Disney Infinity 3.0 Edition Starter Pack will sell for a much lower retail price of $64.99, a pretty big difference from its predecessors. Furthermore,3.0 Power Discs will come in labeled packs rather than being in blind packs. This helps tremendously in playing these games while on a budget (or just trying to get the Power Discs you want). As of right now, no official date has been set for Disney Infinity 3.0, but it is projected for a fall release on PlayStation 4, PlayStation 3, Xbox One, Xbox 360, and Wii U. More info is to be revealed during a Twitch broadcast on Friday, May 8th.