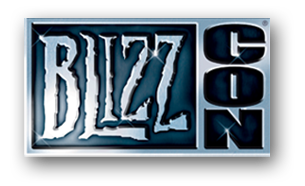 When a developer has their own conference, you know they are doing alright.  Blizzard has been having their own Con for quite a few years now, and the next one is right around the corner coming this August 21st and 22nd.  These events are usually pretty exciting, with the last few especially up there for World of Warcraft players.  This year though, we'll be seeing some fresh faces in the form of Diablo III (YESSSSSS!) and StarCraft.

The show promises plenty of hands on time with the game, competitive tournaments, plenty of disucssion panels featuring developers and team members.  Oh, and swag.  Lots and lots of sweet Blizzard prizes and swag.

Lets hope we also find out about some release dates for these games, especially the five player co-op title Diablo III!

IRVINE, Calif. -- February 17, 2009 -- Blizzard Entertainment, Inc. today announced plans for its fourth BlizzCon® gaming convention, to be held at the Anaheim Convention Center in Anaheim, California on Friday, August 21 and Saturday, August 22. BlizzCon is a celebration of the global player communities surrounding Blizzard Entertainment®’s Warcraft®, StarCraft®, and Diablo® universes. In response to the festival’s increasing popularity, this year’s event has been expanded from three convention halls to four.

“We’ve been amazed by the incredible response to each of our previous BlizzCon events,” said Mike Morhaime, CEO and cofounder of Blizzard Entertainment. “We’re pleased to be bringing the convention back to Anaheim this year, and we look forward to this new opportunity to meet Blizzard gamers from around the world.”

BlizzCon will offer a wide variety of activities throughout the two-day event. In addition to serving as a gathering place for Blizzard Entertainment gaming communities, attendees will be able to enjoy:

Further details, including ticket availability and pricing, will be announced on the official BlizzCon website, www.blizzcon.com, as the event draws closer.