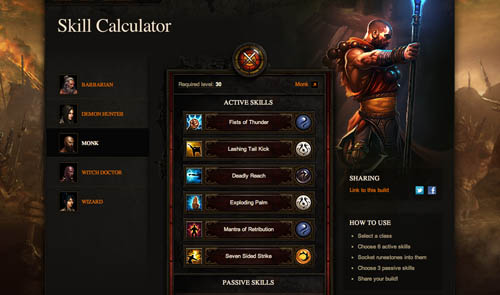 The demon is coming... and I shall be prepared for him...

My preparation for Diablo 3 shall be achieved thanks, in some part, to the new Skill Calculator Blizzard has put up over on the European version of the Diablo 3 Battle.net site. From the site, you can select your favorite class of the five, up to 6 active skills, 3 passive skills, and even socket runes with the active skills to increase their effects. What's most striking about this calculator is how vastly it differs from Diablo 2's skill tree and the interdepencies between those skills.

Diablo 3 still has three skills trees from which to select your skills, though some of those trees are a bit more sparse than others. What's more, the skills to which you have access seems to be solely dependant on your current character level with no stated requirements that other skills must be accessed first. Additionally, each character gains access to three Passive Skills that grant benefits like reducing the cooldown on certain Active Skills, or increasing your elemental resistance. This is certainly a bit of a game changer for the much beloved and long-running action-RPG series, especially if the maximum number of Active Skills any one character can have is 6. Fortunately, the different runes that can be socketed to the skills add some flavor to the seemingly limited set of abilities and certainly allow for a fair amount of variation within the skills themselves.

One thing to consider with all of this is that the Skill Calculator is currently capped at level 30, not the stated level of 60 so it's hard to say whether we're seeing all there is to this skill system. The leaked beta screens showed some of what the game looks like in action, but very little about the character customization itself. Hopefully that rumored "closed" public beta will be hitting soon so we can get the full scoop.