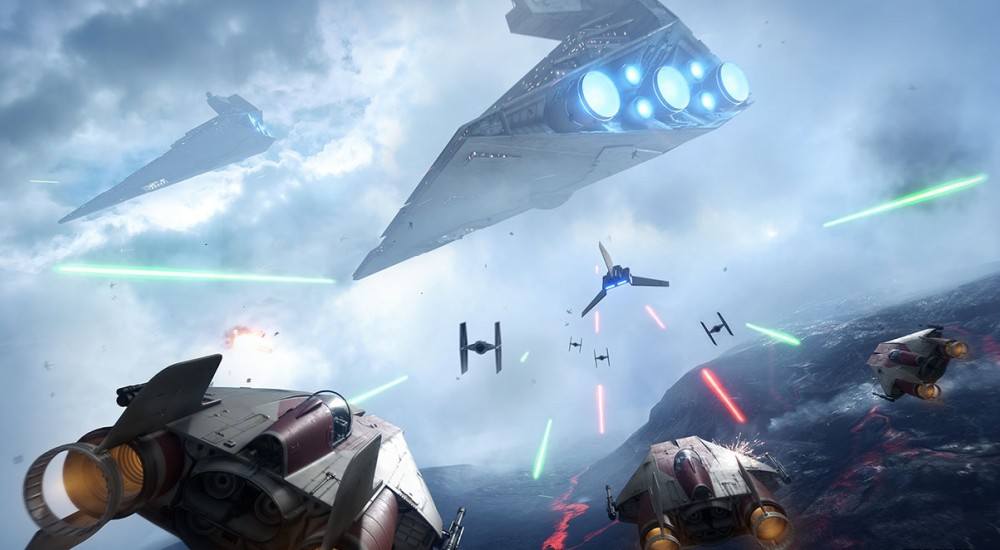 I know the Battlefront games are supposed to focus on those poor, unnamed schmucks who get wasted in all of the Star Wars films. You know, the ground troops crushed by AT-AT's, or wasted by Stormtroopers, or maybe ravaged by renegade rancors. But, to be honest, if we're just focusing all our attention on guys with laser rifles blowing each other away for one cause or another, it just doesn't feel like Star Wars. Thankfully, the folks down at DICE agree. At Gamescom this year, they revealed the "Fighter Squadron" mode for Star Wars Battlefront.

Considering that each film in the original trilogy ends in a spectacular battle between the Imperials and the Rebellion in the air in the depths of space (and one with Ewoks), it would be remiss if we couldn't fly around in an X-Wing with our buddies and waste TIE's. Or maybe you just wanna get that sweet Imperial pension and not get force-choked out, so you suit up and blast the Rebel Scum out of the air with your wingmen.

We don't know a whole lot about the Fighter Squadron mode just yet, or even if it will have a dedicated co-op mode. However, they have been very open about there being 20+ AI fighters in the air at once, hinting that perhaps you and some buddies can hop into your preferred ship and blaze into the sky without worrying about any PvP skirmishes breaking out.

We'll have more info later on, but the inclusion of this mode definitely adds to my enthusiasm for Battlefront's release later this year.