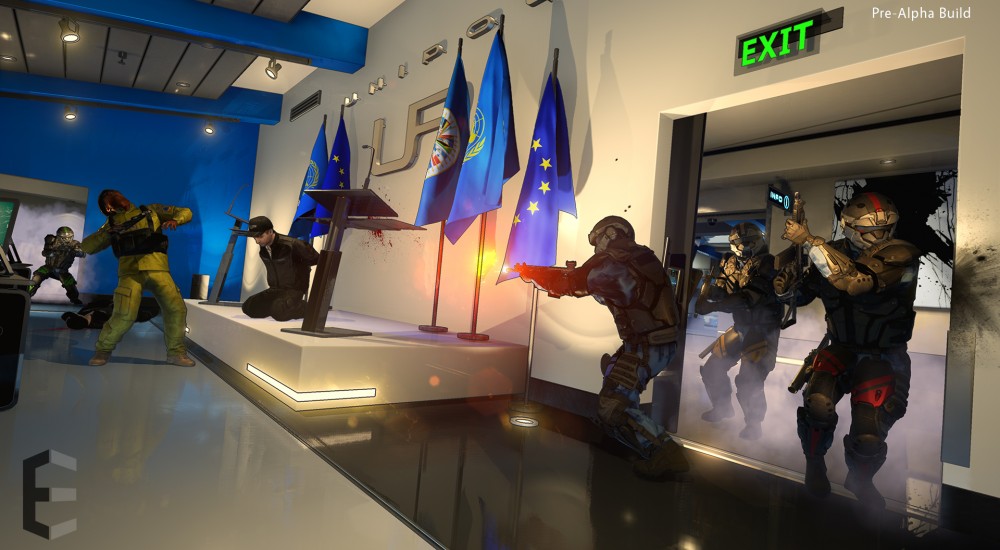 If you ever played the original Rainbow Six titles (the PC ones from the 90s) - you know the best part about them was the planning phase. It was here you'd pick your team, equip them with gear, and then plan out a strategy that included routes, timing, and takedowns from a little top down tactical map. You could even run these plays without directly controlling your squad to see how well your plan would work. The recent indie game Door Kickers captured this feeling, but it missed the option to go in direct control.

Serellan Studios, makers of Takedown, have announced a new game that hopes to capture the feeling of those classic tactical FPS games from the past. It's called Epsilon and the first screenshots are already making it enticing with a unique art style built on Unreal Engine 4. But looks aren't everything, so Serellan came armed with more muscle.

The core team includes Craig Gilmore, artist who has worked at Marvel, DC and Ubisoft on titles like Walking Dead and Revolution. Music is being written by Rich Douglas who's credits include Insurgency and Shadowgate. The team itself at Serellan is comprised of many industry veterans that have worked on everything from Ghost Recon to Halo and even the more recent SOCOM and MAG titles. The game is getting a full unveiling at PAX this weekend in partnership with Razer. Of course a tactical game wouldn't be anything without co-op, and while the game is launching on Steam Early Access this fall, it won't be with a co-op mode initially. Creative Director Christian Allen breaks it down for us.

We are launching into Early Access, so the game will be built in stages.

Stage one is focused on Single Player, stage two is Co-Op, and Stage three is Versus.  In addition, we are exploring a crossover competitive Co-Op mode that may come before or instead of Versus.

While Takedown didn't quite live up to our expectations, or the expectations of many of its Kickstarter backers, there was still some solid groundwork there. This time Serellan is self-funding the game which should help alleviate some of the crowd-funded pressure. Right now the game is targeted for PC only.