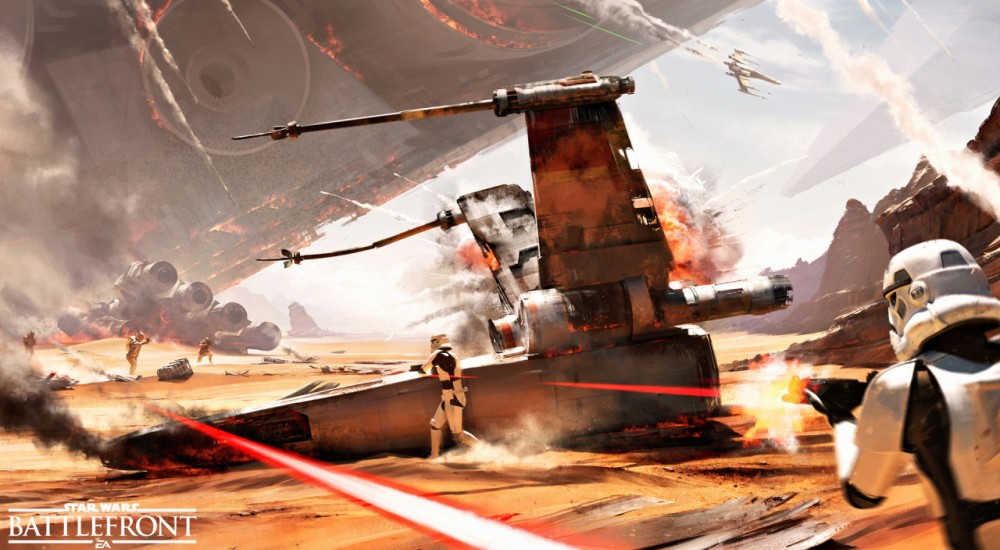 When Star Wars meets Battlefront, everyone wins! Well, except for the guys on the ground. They all lose pretty hard. Whether they die alone from laser burns on some backwater planet, or get force choked to death by a lightsaber-wielding sociopath for failing to secure a checkpoint, their suffering is our delight. I'm sure the infantry on both sides are dreading Star Wars Battlefront's November 17th release date. However, we can celebrate with a launch trailer chock full of lasers!

The trailer also showcases some of the classic hero units available. Sadly, those are limited to the non-co-op mode.

There's been a lot of talk about how Star Wars Battlefront is a "couch co-op game." And that's not entirely inaccurate. There is a co-op mode where you and a pal play as rebels, fighting off hordes of troopers and some AT-STs in a survival mode. We've written about it before. On consoles, it's a "couch co-op" game, since you can play it splitscreen with a buddy. The PC version doesn't have splitscreen, so unless you both happen to have your PC's on a table in front of your couch (which, seems less than comfortable, but possible) it's just straight up co-op.

That being said, the vast majority of the game isn't co-op. It's versus. Even if you and a handful of friends join forces, you're still waging war against another handful of human beings. We here at Co-Optimus hold the definition of co-op to be:

"A co-op game is a game where two or more players work together to accomplish a goal against AI opponents."

We're still showcasing Star Wars Battlefront, because the "Survival Mode" does look like a ton of fun. It might not be the main feature of the game, but I'm certain at least of few of us will bank a few hours into it. For that reason, we're looking forward to November 17th.