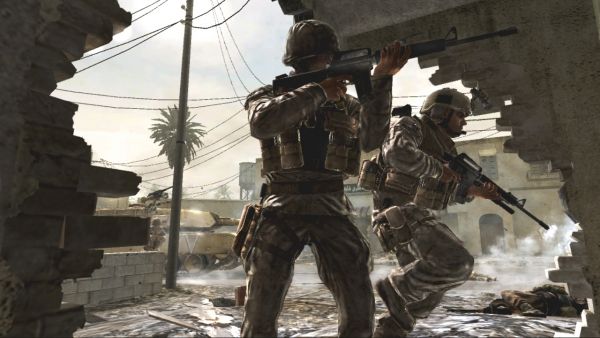 Get ready for a plausible rumor with a less plausible source.

The internet is abuzz today with a rumor that many are calling "too good to be true". The live Twitter page that Infinity Ward set up as a suggestion "Tweet" collector pertaining to the not-yet-officially announced Call of Duty: Modern Warfare 2 was adorned with a series of Tweets from someone who claims to be an internal play tester, and they were in a sharing mood. A full list of MW2 details has been spreading across the internet, promising a healthy myriad of both Modern Warfare and World at War features...as well as a few new surprises.

Gamers arguing that the info is credible point out that the culprit is now banned, and the Tweets are removed. Gamers ruling not credible propose that the Tweets were fake and were pulled down by the culprit as a courtesy. Either way, Infinity Ward is locked up tight.

*Similar version to Nazi Zombies, however details are unknown
*NO guest players online, 1 player per console
*Offline/Online Co-op
*Release is set for sometime in November
*New army tags will be available to add different elements in campaign (similar to halo skulls)
*Campaign-only weapons

For obvious reasons, this portion of the list caught our eye. For the entire list in all of its extremely enticing glory, please click "Read More" and feel free to expect Infinity Ward to live up to the high co-op bar that is being set by rumors and Tweets alike.

*Vehicles will be in MW2
*M16 will return, using stopping power will only be OHK at head, neck, and torso (abdomen, limbs, and hands/feet will not)
*Ak47 and M4 will return, unknown if there are any changes
*M40 will return, ACOG damage boost will be fixed
*Scorpion, P90, M21, R700, G3, G360 will not return
*There are more unknown weapons that will not return
*New sniper rifle: SR25M (United states forces)
*New Assault rifle: Diemeco C8 (Canadian forces M4 equivelant)
*New Assault rifle: L85A2 (United Kingdom forces)
*Total weapons in multiplayer are said to be around 35
*Favourite Modern warfare 1 maps will return
*Helicopters, air strikes, UAV will return
*Red dot sightings will come in different shapes for multiplayer (circular, square, original)
*Snipers will have special grass camouflage (As seen in Modern warfare 1’s campaign)
*All perks will return from MW except eavesdrop and others will be altered
*All gametypes will return from MW and all will have hardcore versions
*New gametype: Secure (Call of duty version of capture the flag, however you capture the enemy’s Intel)
*New gametype unconfirmed name, similar to search and destroy, however instead of trying to plant a bomb, you try to kill a specified enemy
*Solider customization for each class (and each country)
*Sniper with silencers will NOT be in multiplayer
*There are NO bots in local multiplayer
*Similar version to Nazi Zombies, however details are unknown
*NO guest players online, 1 player per console
*Killcam save feature
*There is blood and gore
*Offline/Online Co-op
*Story takes place in the Middle East
*Role as US marines return
*Ken Lally voice work in campaign
*Release is set for sometime in November
*New army tags will be available to add different elements in campaign (similar to halo skulls)
*Campaign-only weapons

A lot of these items are common sense, which leads me to believe that it has a very good chance of being legitimate. However, we've seen some dumb moves by developers in the recent past...so we'll stand by for confirmation.

In the meantime, I need a change of pants.

I mean; I can't get into how-much-if-any is true, how much is false, etc (there's a reason why companies "don't comment on rumors"... it would NEVER F------G END), but this list wasn't put together by anyone with any insider information. There's also some craziness that should red-flag this as "stuff I made up and wrote down" (like grass camo for snipers... that's straight out of CoD4 MP).

Anyhow. List is fakey-fake potshots, sounds like a boring f------g game, and isn't from someone who's seen what's running on our devkits here, ahthankyouverymuch.

I preferred when rumors were ground breaking, like when we were making that Sci-fi Stealth Assassin game in space.

Glad people are finally realizing those 'leaks' were just BS some blog made up to get hits.