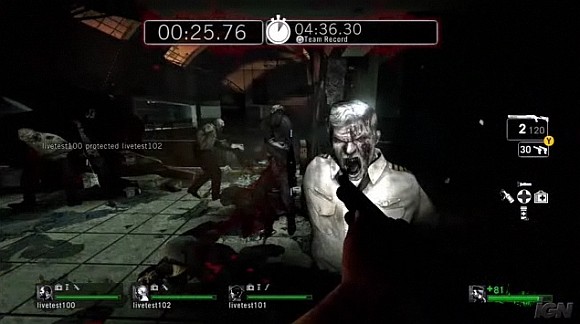 IGN was lucky enough to have some quality hands on time with the upcoming Left 4 Dead DLC called the Survival Pack.  The content launches this spring for the PC and Xbox 360 for the low low price of FREE, and includes a brand new co-op mode called survival.  The challenge of the mode is to take on endless waves of the undead horde and survive as long as possible.  Think you have what it takes to survive 5, 10, even 15 minutes?  Think again.

Consider this: In all of the play testing that the Valve designers have done while creating this mode, none of them have ever survived past the 10 minute mark. We're told the company best so far was about nine minutes, with a team of elite players battling like crazy to keep one another alive. Our experience at Valve averaged around three or four minutes a round, but they're like the fastest three or four minutes of your life.

That sounds incredibly intense.  I'm guessing it's just a constant "zombie horde" moment from the games main campaign. Similar to Call of  Duty's zombie mode certain areas of the map get unlocked.  What's different is the game unlocks certain areas of the map only after hitting timed goals.  It's then players must work together to move and get ammo, upgrade weapons, and pray they don't get ambushed.

There's a video of the action right ahead.