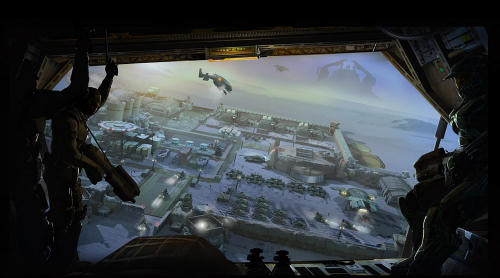 I am always impressed when a franchise can take a fan favorite, and risk translating it to something completely different. I've always loved the Halo universe, but I'm not a huge fan of shooting games. So, to see Halo shed its FPS skin into the very different RTS form in Halo Wars, it was love at first sight. To show my affection, I found it absolutely necessary to complete all of the secondary missions, and find all of the games Easter Eggs.

All of the levels I played through with Tino, but we felt very rushed the first time for whatever reason – excitement maybe. A lot of the secondary missions were left behind, and many skulls were overlooked. I had made a few attempts at overachieving the levels I'd already played, by trying again in the single player campaign. I did not fare well against the odds. 750 flood is a lot to take out by yourself...So, I looked back to the co-op, which yielded much better results the second time.

Retracing my steps a bit, I played through the Arcadia City level again, this time with Nick (BAPenguin). Arcadia City is the crazy mission where you have to protect civilians and transports to complete the secondary objectives. It took us a few tries to get a feel for how one another played, and to get me to pay better attention to the transport I was in charge of protecting. Constantly changing enemy strategies caused us to have to readjust our strategies on the fly. If the Covenant went after civilians, we would have to cover the civilians without fully ignoring the Transports. If the Covenant attacked out transports, we'd have to balance civilian coverage for our transports. I think one of the things I was missing, was the communication. How does your buddy know what's going on with your side of the map, if you don't tell them?

So, I learned something that day. Aside from "pay attention!" I learned how important communicating is to enjoying a tactical game with another person, that may approach a situation differently than you.

After that, I continued the campaign with Tino. In order to complete levels more efficiently with more of the objectives, we reevaluated our strategies constantly to get more of the secondary objectives completed the first time, and most importantly: communicated what was going on! The games enjoyment skyrocketed with each optional objective we managed to complete together, each “achievement unlocked” pop-up, and each skull that showed up in my list.