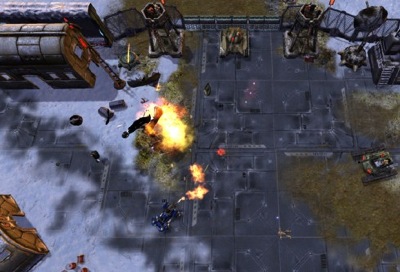 The first Assault Heroes title was a solid top down shooter featuring cooperative support on XBLA.  It was grossly under-rated though and it wasn't until a recent $5 price cut that a lot of people picked it up.  This should bode well though for Wanako games as Assault Heroes 2 is now set to be released on the arcade on May 14th.

The new title is set to have a host of new features, including new co-op modes as well as new vehicles types, and the ability to hijack said vehicles.  The new game is said to contain more levels than the original, as well as a greater variety of level types.  Lets hope the folks at Wanako Games can deliver another solid cooperative experience!