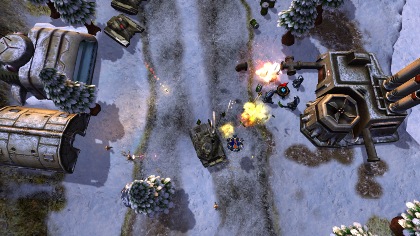 One of the surprise titles of Xbox Live Arcade was Assault Heroes from Wanako games.  It was a witty, beautiful, and most importantly fun top down shooter with cooperative play.  Over a year later Wanako is back with the sequel and it promises to have more style, more bad guys, and more levels.  Most importantly the game has a renewed focus on co-op play with not only co-op specific attacks, but different ways to play cooperatively including replaying specific sections of the game or playing through the game in it's entirety. One thing you'll immediately notice is the game's overall difficulty has been increased, in fact trying to go through solo will prove quite the difficult task.  Unfortunately it doesn't seem like the difficulty scales at all when adding a partner, so at times we almost found it too easy.  Each player still controls their little red or blue buggy, but now there is an option to acquire other temporary vehicles like a helicopter, tank ormech .  These vehicles each have their own specific attacks and are randomly scattered throughout the game's 29 levels.  The really beautiful thing about co-op is the ability to force teamwork.  In fact, the game pulls players lives off of each other after exhausting your own making it crucial to keep your teammate alive.  While the first game had optional sections to go underground on foot, the latest iteration forces you to exit your vehicle and brave the conditions in certain sections.  The previously mentioned underground areas are more focused and themed to your level as well as having quite a bit more length to them.  At time you'll feel like your playing the old arcade game Smash T.V. where it's crucial to call out targeting zones between players to survive.  All in all these are fun diversion from the straight up mayhem of the vehicle areas. 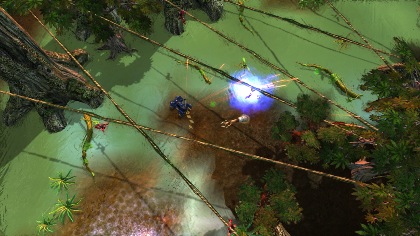 All the weapons from the original return; chain gun, turret, and flame thrower, and there's a new addition of the ice gun.  Each one of these weapons has a specific co-op attack.  It's great to unleash these attacks, but at times they feel out of place because it forces the other player to suddenly switch to the weapon the player whoinitiated the attack was using.  Attacks appear to be generated by destroying consecutive enemies, and when two players are good enough they'll easily find themselves unleashing consecutive attacks. Assault Heroes 2 is the classic arcade co-op experience.  At times the game is frustrating with difficult level design, tough to see areas, and just a general problem with pacing.  That doesn't stop the game from being fun. Wanako does a nice job of mixing up the 29 levels, and there's even new space areas with a flying ship and new weapons.  Assault Heroes 2 improves on every aspect of the original, while still differentiating itself and adding a focus on cooperative play.  Despite some annoyances you and a buddy will have plenty of fun, just look out for the suicide bombers in Cadillacs.

The Co-Op Experience: The Co-Op ExperienceThe Co-Op specific content is a special attack.The game remains capped at a two player co-op experience. The team looked at expanding the number of players to four, but found the screen too cluttered for its own good. Even though it is still locked at two players, a couple of new features have been added to make the co-op game more enjoyable. The first is the option to replay single stages co-operatively, rather than having to start from the beginning and work your way through the entire game. The team has also made it easier to activate the co-op linked weapons. Either player can hit a button to begin the strong attack as opposed to the old style where both had to engage the power at the same time for it to work. [IGN]