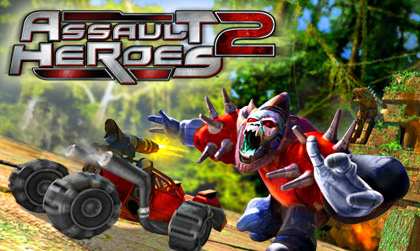 We sure do love our contests around here.  So with that I present to you the latest contest from Co-Optimus.com.  Last week Assault Heroes 2 was released for the Xbox Live Arcade.  The game is a top down shooter featuring 2 player co-op play via Xbox Live.

To celebrate we are launching the Assault Heroes 2: "Scars of War" contest.

"Taking on the forces of evil with a comrade will only bestow scars of war! The first 3 players who obtain the 'Heroes Campaign' Achievement, by competing all the areas on Hard difficulty with the help of a friend, will nab an awesome Assault Heroes 2 hat."

Now I know it says 3 players - but that just wouldn't be fair now would it?  So both YOU and YOUR FRIEND will get an Assault Heroes 2 baseball cap for completing this achievement.

Once you complete this achievement reply to this thread with your gamertag(s) so we can verify the date and time.  Good luck!