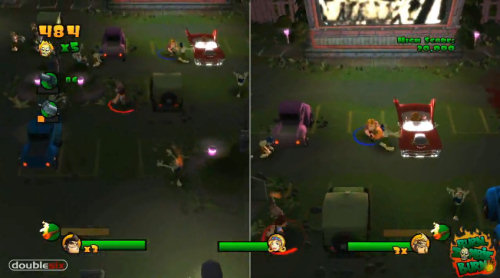 There's a whole bunch of videos showing off the single player modes of the game, including an incredibly fun looking one where you lure flaming zombies into an exploding skull.  Happens everyday to me.

The game does support 2 player split-screen co-op play for certain modes, and there's a video showing off one called Co-Op Defense.  In it, players are tasked with defending Bruce's girlfriend Daisy from the onslaught of zombies.  Setting the zombies on fire not only helps your score, but drops health packs to keep Daisy alive longer.  Scoring plays a big role in the game, and the co-op modes use a combined score for maximum teamwork.