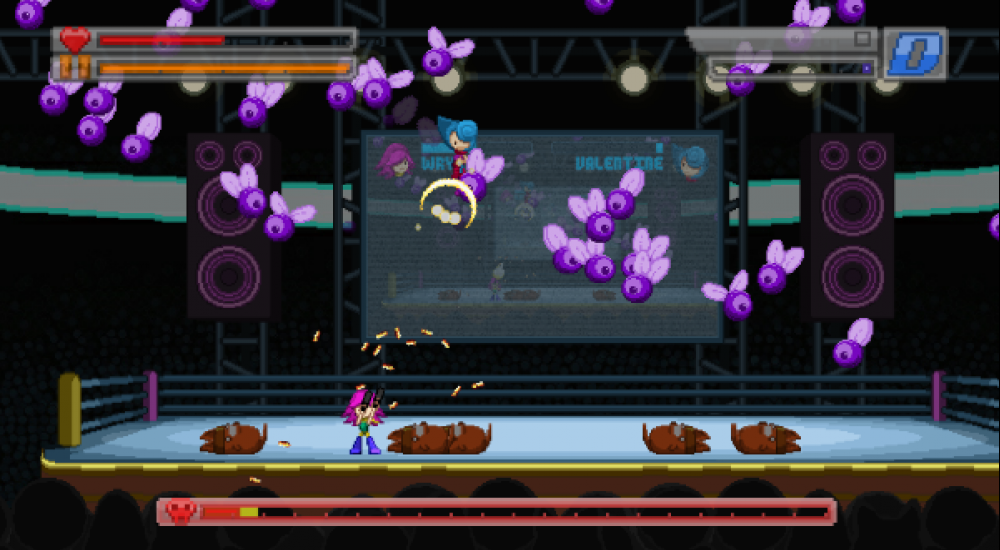 We've got kind of a bad-news, good-news situation on our hands. Bad news: the world is only down to one superhero, and it's being invaded by a mixture of limbless but hostile cat aliens, and magical girls.  Good news: the remaining superhero is the Greatest Of All Time, when she's not too busy binging B-movie horror flicks to save the world. Bleed 2  finally breaks away from PC solitude to launch on consoles.

Available now on PS4 in North America, and Feb 7th in the EU, followed by an Xbox One release on Feb 9th, Bleed 2 takes you and a buddy through a blissfully punishing run-and-gun romp across the world.

Take a look at the trailer.

You (Pink Wryn) and your co-op pal of choice (Yellow Wryn?) are the only ones who can fend off these otherworldy raiders. It seems a bit dismissive to refer to Wryn as the only remaining superhero if she's got a partner gunning right beside her, but maybe the rules get fudged if said partner is an off-color clone of her.

The frenzied design invokes the ghost of the much-beloved Gunstar Heroes, with some palate-swapping goodness of Ikaruga.

Xbox One users can still pre-order the game for an additional 10% off. If PC users wish to visit Wryn's first adventure as well, you can pick up a bundle on Steam for a reduced price as well.