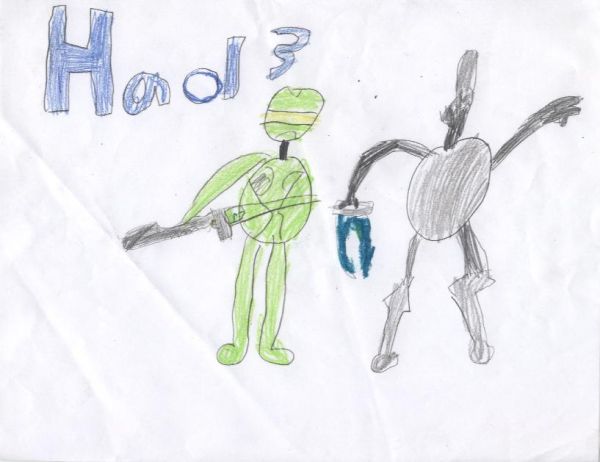 I'll get a few things straight as we begin: this story is quite "cutesy".  After you read it, you'll probably think I'm just an indulgent father, who has an overinflated perception of his kids.  You might also be thinking this tale has little to do with co-op.  The first two might be true, but I think this whole story involved co-op on the deepest level.  My sons and I have all enjoyed both Halo 3 and Halo Wars.  I'm not quite sure why my youngest, especially, loves the games so much, but I will tell you this: being able to play the game with my kids, even when they are just watching, has really added to my own enjoyment of the game.  This is what co-op is all about.

It all started when we picked up Halo 3, after a long hiatus.  We had some days off of school due to snow, and so we decided to play some games through to completion.  My oldest son and I played through the last half of the campaign, in glorious split screen co-op.  It was a good time; the game is one of the better co-op experiences available on the Xbox 360.  Brandon, the eldest was the star, being far better at shooters than his old man.  The little brother, Connor, ate it up too.  Anytime Halo 3 came on, he dropped what he was doing and plopped down on the couch with us.  He was actually quite helpful.  He kept us informed as to where the bad guys were.  He directed us back to revive one another.  He howled in joy when we picked up dual weapons.  I felt bad for the kid, and wished there was some way for him to play with us.  Apparently, not being able to have a controller didn't dampen his enjoyment, though.

One Saturday afternoon, Connor and I were home alone.  He brought me a note, pictured below.  Now, as a loving father, and a rather conservative one at that, I am in a quandary.  Obviously, the boy loves Halo.  I love him, I want him to be happy, and I love the game myself.  Of course I want to let him play.  On the other hand, the game is rated M!  He's only seven, after all.  According to the ESRB, that rating is for blood, gore, mild language, and violence.  It was a serious dilemma.  The final compromise?  We turned the volume down, and had a discussion about how while killing aliens in a video game is acceptable, we never hurt anyone in real life.  Even if they are a bloodthirsty, heavily armed Covenant trooper. We fired the game up, and started a fresh campaign.  At first, I was worried that Connor would find the controls too difficult to get used to.  After all, I had only just gotten over my "can't play a FPS with a controller, keyboards ftw!" phase myself.  Imagine how surprised I was when after just a few moments, my sweet, innocent, angelic little boy was headshotting bad guys with the sniper rifle.  We actually did pretty well together, and he earned an achievement or two.

A few weeks later, we took a trip to Toys R Us.  The aisles were full of the greatest action figures the entire world could offer a first grader.  Ben 10 and all of his alien forms, a brand new series of Power Rangers, and their awesome Zords, Spider-man, Iron Man, Batman, Superman, Mighty Muggs of every shape and form, even the pinnacle of toy perfection: Transformers.  What does my boy pick from this cornucopia of plastic goodness?  A Halo 3 Master Chief figure.  And let me tell you, it's a good thing they didn't have his partner, the awesome Arbiter, or, as he is known in our house, "the big, good alien guy".  It was quite a surreal experience to see him take "Master Halo" in to church with him, sniper rifle and all.

Now, all of this happened a few months ago.  "Chief Halo" has been lost and found three or four times now, and his gun is missing several parts.  Connor reminds me often of my promise to find "the nice alien partner with the laser arm thingy" on Ebay.  But we haven't played Halo 3 too much as of late, and so the new has worn off a bit.  This all changed with the arrival in my mailbox of a copy of Halo Wars. When I opened the package, Connor's jaw dropped.  "DAD!  There's THREE Halos!  You gotta play it right now!"  Hurriedly, we popped it in and played for a couple hours.  Connor watched it all, drinking in the action, the drama.  He insisted I pause the game so he could find his Master Chief figure, and he played with him as I played through the first few missions of the campaign.  The cut scenes were hilarious to watch with him; he shouted things like "Hey, I know him from Halo 3!" and "Why are you fighting the good aliens, Dad?  Where's Master Halo's friend?"  He immediately added Forge to his list of heroes to adore.  In fact, he appears in one of his latest drawings, as you can see above.

Even though Halo Wars doesn't support local co-op, Connor definitely was a big help to me.  If Forge or a Spartan fell, he insisted we revive them as soon as possible.  Whenever a red X appeared on the radar, he let me know.  Any time a new unit appeared, my boy was giddy.  The Elephant ("A base with a gun and wheels!") and the Hornet ("Hey you rode one of those in Halo 3!) are the biggest hits so far.  When I asked Connor which Halo game was his favorite, he pondered it for several minutes.  Finally, he decided that they are both his favorite.  Clearly, the boy has good taste in video games. Last Saturday evening, Connor came to kiss me good night.  He hugged me and looked me square in the eye.  "Dad, we have got to play Halo Wars again tomorrow, OK?"  I promised him we would play it together again as soon as we could.  The next morning, I had a few minutes to myself, and thought I'd play a little Halo Wars, naturally.  I checked the disc tray: empty.  I looked in the game drawer.  No luck.  I checked my computer room, the bathroom, everywhere else it might have been.  I asked my wife if she had seen it.  With a hint of a smile, she told me that Connor had taken the game to his bedroom the night before, and had it safely tucked away under his pillow, a place usually reserved for Red Power Rangers.  Yes, from a whole room full of toys, books, DVDs, and more, he chose to take my copy of Halo Wars, game disc and all, to protect him from bad dreams.

Playing Halo Wars is a definite bonding time for our family.  Even big brother gets in on the action every once in a while.  Now, remember, I warned you this story was a bit cutesy, perhaps even unbelievable, but I assure you, it's all true.  I'm sure the three of us will spend many evenings together blowing up aliens at a frantic, pulse-pounding pace.  High fives and fist bumps will be everywhere.  And you can bet I'll be looking for an Arbiter action figure on Ebay!  Only one thing worries me, and that is another drawing that Connor did recently...