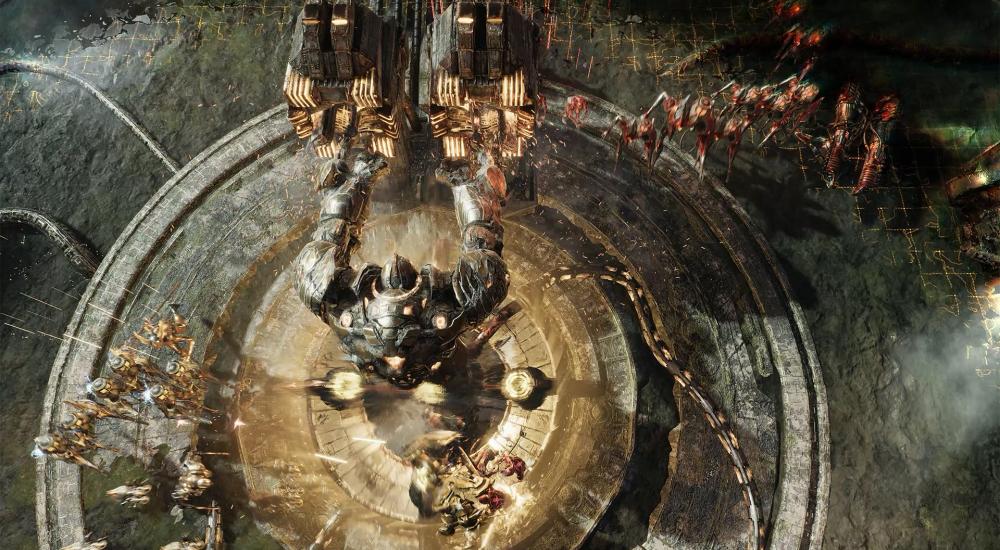 Happy Wednesday, everyone! If you missed out regular Monday night stream (kicks off every Monday at 10:00 PM EDT over at twitch.tv/cooptimus) this week, we covered not one, not two, but THREE co-op games that have seen some form of release recently. Up first was Laser Guided Games' deck-building meets RTS title, Golem Gates.

Before diving into Golem Gates' gameplay and mechanics, I'm going to take a quick detour. I'm a fan of deck-building games since about middle school when my friends and I all got into Magic: The Gathering. When I think of those types of games and what that experience is like, the main idea is selecting your cards around a core combo, or set of combos, and some additional cards that help you respond to specific weaknesses and threats (this is setting aside everything having to deal with metas and pro play, just playing for fun). There's a methodical and, at times, slow deliberateness to the pacing.

When I think of RTS games, I think of things like Warcraft and Starcraft; you're focused on actions per minute (APM) and how quickly you can build up a force to obliterate your opponent. Every second counts as you gather resources in order to build a particular set of buildings so that you can then produce a particular set of units and upgrade them. There are, of course, some exceptions and caveats to that, but the general idea is that you have to respond quickly in real-time to situations that arise and that response usually hinges upon you being able to do certain things.

So, then, Golem Gates takes those two ideas in each hand and mashes them together. The result is something that is unique and intriguing, but, for now, a little messy.

Note: In the video I say the game is in "Early Access," which is a mistake. The game left Early Access and fully launched on March 28.

Much like a deck-building game, you'll be assembling a deck of cards (called Glyphs) that allow you to summon units, defensive structures (like towers, mines, and traps), and cast spells (like buffing units or doing damage to enemies within an area). This deck, then, represents all the things you usually get from the buildings/structures you make in an RTS game. You're given an initial hand of Glyphs, and you draw a new Glyph every few seconds. Your ability to cast these Glyphs is limited by your energy bar (i.e., your main resource), which fills up over time and can be increased by capturing certain spots on the map. Once you summon these units, the RTS factors kick in. You select units and mouse click to move them around the map, you can group up units into squads using the CTRL key and a number, and there's a "fog of war" that limits what you can see and also where you can summon things as you can only summon units or cast spells in areas not obscured by the fog.

There a variety of game modes (Story, Versus, Trials) that largely revolve around you against another summoner that you have to defeat. The main one we're focused on here, however, is the co-op Survival mode. Two players craft their own decks and team up online to do their best to survive against waves of enemies for 15 minutes. There are some preset maps from which to choose, or you can play on a randomly generated one. If you and your buddy manage to hold out for the full amount of time, you'll earn some new Glyphs that you can use to further customize your deck.

I really like the idea of this (i.e., being able to strategize what units/abilities I want to use and thinking of different ways to combine them), but something about it just feels off. Personally, I'm a bit at odds with trying to reconcile the slow, methodical pacing of a deck-building game that gives you all the time in the world to think of how to respond to a particular situation, with the demand for a fast response in an RTS. The fact that your units/abilities are provided to you randomly means that you may find yourself completely out of luck in some cases as you just don't have the Glyphs you need and you don't know if the Glyph that comes out of your deck will help. While that can create some interesting/exciting "save at the last minute" moments, for me, it often felt frustrating. It also doesn't help that many of the basic units have a similar enough look that it can be hard to distinguish one from the other. That said, I'm very curious to see how this title develops further over time and what further refinements the developers make.

Golem Gates is available now on PC via Steam. Two player online co-op is supported in the "Survival" mode.