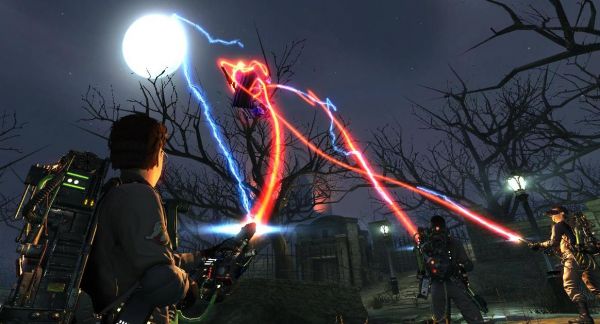 The rumors about a solid co-op mode in Xbox and PS3 versions of Ghostbusters were bounced around for a long time before finally being confirmed. We already know there were four original Ghostbusters in the film version that worked as a team to defeat some very memorable enemies, so what was the hold up? According to Tony Laborie, producer of Threewave Software, there were so many amazing things to be put in this game, Co-op almost didn't fit!

"How on Earth would we make it work in Multiplayer where technical limitations (on number of physics objects, enemies and bandwidth restrictions) can be very strict? TRI had very simple Multiplayer technology at the time with a competitive “Ghosts vs. Ghostbusters” design that had problems."

After a major studio merger, Ghostbusters fate was undecided, but Threewave was confident the project would live on. Eventually, Atari cued up the familiar rescue sirens of the Ecto 1, arriving just in the nick of time to save the game. Ghostbusters lived again, so to speak, with later deadline that corresponded with the Blu Ray release of the movies. Things started coming together, and we were given the news we'd been waiting for.

"Over the next month or so, however, we got more and more excited about the possibilities. Co-op gameplay was first and foremost in our minds; everyone wanted to play as the “actual” Ghostbusters team. We came up with a co-op design that maximized teamwork while allowing players to also compete among themselves, framed against the theme of “a day in the life of the Ghostbusters Team."

“As our gameplay became more focused and successful, our tech team overcame what had earlier seemed technically impossible.”

We're glad things worked out eventually. Now we have the opportunity to be slimed along side a buddy this summer in a bunch of different modes!