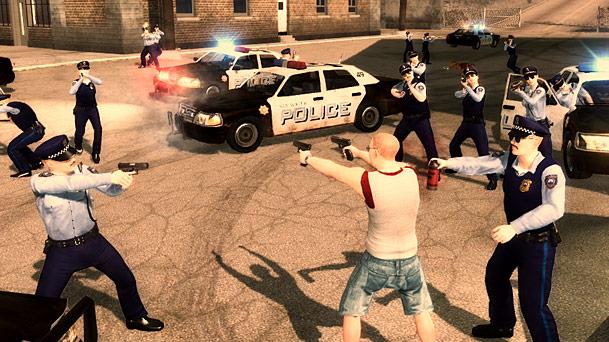 I'm going to begin this news post with one of the most bizarre developer quotes in recent memory.

"Consider this: You've got Tera Patrick on speed dial," Volition's James Torbit described. "She's unloading an assault rifle into a Masako super soldier while you're driving around a truck full of dead bodies. In your garage you've got an armored vehicle that fires heat-seeking missiles as fast as you can pull the trigger... and you're wearing a new alien costume. Honestly, WTF is going on here?"

That seems to be a fair question.  Torbit is describing the upcoming DLC pack for Saint's Row 2.  The pack will be entitled "Ultor Exposed".  Speaking of exposure, the aforementioned Tera Patrick is an "adult film" star.  No word on how much of Ms. Patrick will be exposed in the game, if any, but that's what the internet is for, after all.  As far as co-op goes, Ultor Exposed will feature "a new co-op metagame that tracks your performance during missions in co-op and hands out bonus cash to the player with the better score."  This DLC sounds interesting, on many different levels!