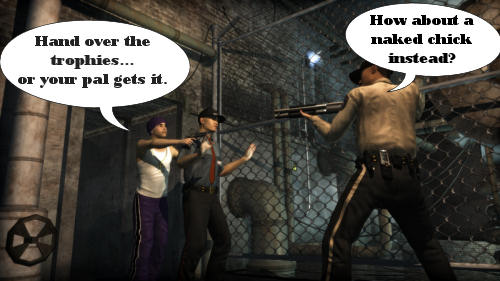 With Saint's Row 2 hitting store shelves today, we thought we'd tidy up some related news to the 2 player co-op title.

First the bad news.  The PlayStation 3 version of Saint's Row 2 won't have trophy support, despite previous talk about said feature.  So if you have a slight addiction to the dings and dongs of Achievements or Trophies, the 360 version is your best bet.

Now the good news.  Saint's Row 2 features boobies.  Lots and lots of boobies.  Normally this would mean one thing... scandal!  But it actually doesn't concern publisher THQ.  In fact, according to a recent interview with Edge Online, the folks at THQ and developer Volition have worked very closely with the ESRB to make sure the game meets the ratings guidelines.  This actually allowed for full frontal nudity.

Don't get too excited yet.  The nudity in the game is actually blurred out, and even if some inventful hackers try to find a way to remove it, they will be greeted with an asexual like texture underneath.  All of this work is for a "streaking" mini game in Saint's Row 2 that lets you score points for running your bare derriere in front of onlookers as long as possible.

Want to see the it in action?  Hit the read more link for the full video.