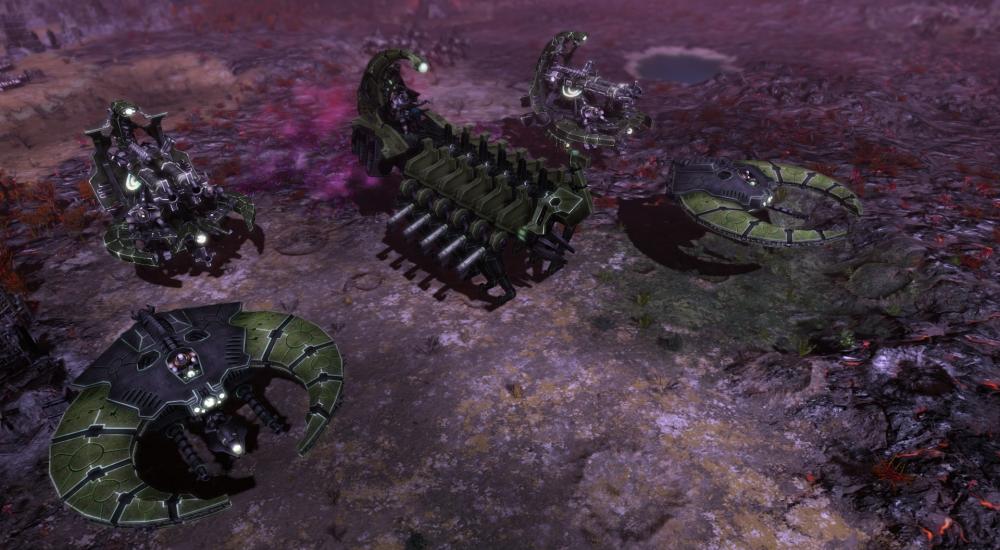 The latest title to use the Warhammer 40,000 license, Warhammer 40,000: Gladius - Relics of War, dropped onto the PC a couple weeks ago, and this past Monday, Nick and Jason teamed up to see what it has to offer within the 4x genre.

The underlying premise to this particular iteration of a Warhammer 40,000 game is that the Space Marines, Orks, Astra Militarum (i.e., regular humans), and the Necrons (the undead of the future!) are all waging war on the planet Gladius in order to lay claim recently unearthed relics/tech. There's an initial tutorial that walks you through the basics (i.e., starting your first city, claiming tiles in order to expand, building on those tiles, managing resources, researching tech, etc). This is a slower paced game than a traditional RTS as it takes a few turns to first claim a tile next to your base, then a few more turns to build a structure, and then a few more to produce a unit. So, don't be surprised if you don't have a new unit until your 20th turn.

After the tutorial, you're free to start up a single-player or multiplayer game. You can customize a lot of different elements - including which faction you play and which factions you play against, teams, map size, frequency of special resource titles, and more - in order to setup a match just the way you want it. When it comes to the co-op side, you're limited to doing a multiplayer match where you put all human players on the same team, and set the remaining available player slots to A.I. bots (either on teams or not). It's worth noting that at the time of us writing this up and when we did the stream, there wasn't a system in place to invite your friends directly into your game. The only way to get your friends in was to do a Direct IP connection, or by making a game public so your friends can see it and join, then quickly switching it to "friends only" or "private."

From there... well, you'll be on the same map as your buddies and working together to either finish your quests or eliminate all the A.I. opponents. Basically, you and your friends will just be out there "comp stomping." There's no sharing of resources or technology, or co-op quests to complete; you're really all just occupying the same map and are prohibited from killing one another, so you might as well focus all that aggression on everyone else. You can strategize with your teammates and figure out how best to go after the A.I., but the deliberate nature of things means that you can't really respond to situations immediately; you'll have to plan things out a few turns in advance, and then completely throw things out the window once things inevitably change during the A.I. turn.

I feel like Gladius is geared towards those folks who were fans of the first Dawn of War game. While there are 4x elements, it definitely leans more towards the "exterminate" side of things as the developers have taken the Warhammer 40,000 mantra of "In the 41st millennium there is only war" to heart. There's no diplomacy to be had or a vast number of ways to achieve victory. You either wipe everyone out or you complete a series of objectives as part of a quest line that's unique to each of the four playable factions, though often completing those objectives pushes you towards the former goal. It's not bad, but it feels a bit lacking compared to other 4x titles out there, and the co-op aspects are definitely lacking.

I'll be curious to see how the developer/publisher continue to support this title and what changes they'll make. I mentioned this while we were streaming, but I don't envy them. Working with an existing IP like Warhammer 40,000 that has 30+ years of history/lore/baggage means there are a lot of "do's and don'ts" that undoubtedly limit what kind of things (such as diplomacy) you can implement in a 4x game. As things stand now, if you've been itching for a new tactical Warhammer 40,000 title and were disappointed by Dawn of War 3, then Gladius: Relics of War may just be in your wheelhouse.