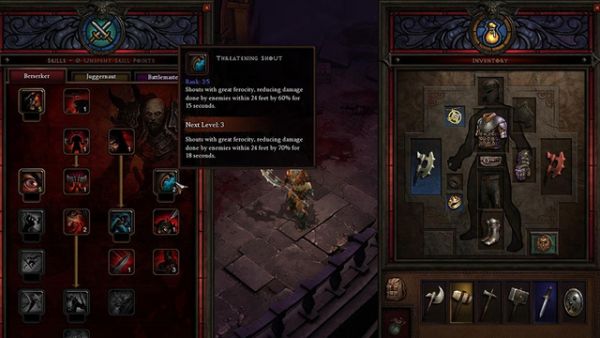 Arstechnica caught up with Diablo III senior artist Mike Nicholson to chat about the user interface design for the upcoming five player co-op title.  Adding more fodder to the fire, Mike let us know that we'll be seeing a lot of borrowing from World of Warcraft.

The biggest place the game will be borrowing will be World of Warcraft's inventory system, though fans will be happy to know different sized items will still be retained from Diablo 2.  World of Warcraft on the other hand uses a singular size item method.  But what is borrowed is a tabbed UI for separating these items, large and small, as well as quest items.

Diablo's bag and pouch system will be slightly changed up as well.  "You’ll get bags and they will expand, you know kind of like in WoW, except you’re not going to open up separate windows," Nicholson explained. "You’ll start off your inventory with say…you know, eight slots, right, and then you’ll get a new bag and that has ten, so two more slots will open up within that tab, but you’ll never have multiple tabs." While some people may not agree with the UI changes, the biggest area we've seen vocal fans complain about is the graphics.   Most complain they are simply too colorful for the Diablo universe.  Bill Roper, one of the creators of the original Diablo, agrees.

"You know, I liked the darker, grittier [style]," said Roper, who chalked up the style of the sequel to the contrary philosophies of Blizzard's Irvine studio and the former home of Diablo, the now-defunct Blizzard North. "It makes complete sense to me where they went because they basically took the Diablo universe and then approached it from the Blizzard Irvine stance for the visuals"

Roper continues to argue that it's not that he doesn't like the look of the game, he does, he says it's just not Diablo.  "I think that one of the things that we always tried to get across was that Diablo was Gothic fantasy and I think there was just a need that was put in there from the visuals that I didn't necessarily get,"  Roper said.

Really though - what does it mean to be Gothic?  Is it a color?  A time period? A state of mind?

"I got it [Gothic Vibes] from the architecture and to a degree from the character design, but not the feeling of the world. I can't say that I dislike it. I didn't look at it and go, 'Oh my god that's horrible.' But I looked at it and went, it's not really... to me as a player it just didn't really ring with Diablo."