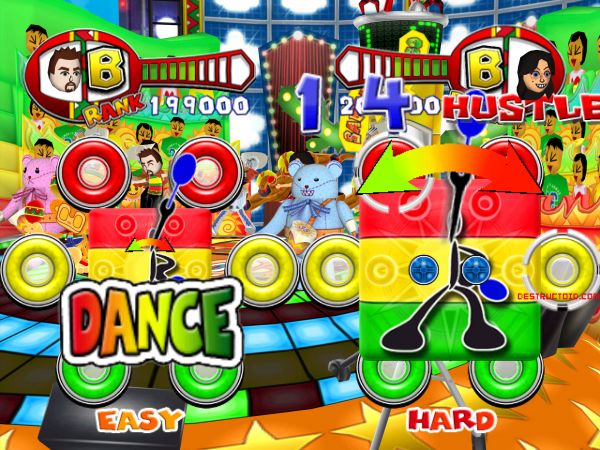 I know what you're thinking: does this guy ever give the rhythm and music games a rest?  Looking at my recent news and articles, you'll see Rock Band, several versions of Guitar Hero, Donkey Konga , and more.  I can't help it!  I love music, and was even a music major in college for a few years.  It's only natural that I am drawn to video games that feature music.  Today we look at yet another in the long list of casual friendly co-op titles, this one visually appealing, full of character, and a bit spicy: Samba de Amigo.

Samba de Amigo first came out for the ill-fated Dreamcast system.  The Dreamcast controller was cool, but wasn't motion sensitive, so you needed some rather nifty maraca controllers to play.  When the Wii was introduced, with its innovative controller, many people put two and two together and predicted a Samba game would be available for the Wii.  This eventually came true just shy of two years after the Wii hit shelves. The gameplay in Samba de Amigo will be quite simple for anyone who has played Dance Dance Revolution, Rock Band, or similar games.  Dots fly out from the center of the playing field to six rings arranged in a circle.  When the dot crosses the ring, players shake theWiimote, all in time with the music.  There are three positions to hold the Wiimote in: high, middle, and low.  That sound pretty difficult doesn't it?  Don't fret though: on easier difficulty levels, the low position is eliminated.  After just a song or two, you'll be shaking maracas like a pro.

As you'd expect from the title, Samba de Amigo features lots of Latin music.  There are some real winners here like "Oye Como Va", one of my favorite pep band tunes from high school.  There are several covers of pop songs, but with a bit of a Latin twist.  A fairly good variety is included, from "Pon De Replay" to "La Bamba" to "Tubthumping".  Co-Optimus staffer Mike will be especially glad to know that "Take On Me" is included, though not his own unique version.  All in all, there are many songs here that fans of all ages will love. Two players can enjoy the game simultaneously, but there is a dedicated co-op mode too.  It's called Love Love.  (Not a joke.)  Instead of competing for high scores, in Love Love mode, players accumulate hearts each time they score a perfect maraca hit together.  At the end of the song, the game gives you a compatibility rating, sort of like awhacked out online dating service.  My son and I earned the lofty rank of "Cute Couple" with a hit percentage in the 60% range.  The game estimated the length of our relationship to be about 3 months. Ok, maybe Love Love mode is a joke, after all; in any event, it's worth a laugh or two, and I can see it being a hit at a party.

One last item must be mentioned, and that is Samba de Amigo's art style.  All sorts of characters, including the titular Amigo, join your Miis in dance through many stages.  Other Sega characters like Sonic appear, too.  Some stages are fairly typical, like a carnival, and others are about as trippy and psychedelic as a game featuring a monkey playing maracas could be.  Bright, colorful, and cheerful graphics, combined with a nice selection of fun songs, make Samba de Amigo a definite hit.  Right now, the game is available for $15 at Amazon, and I assure you it is well worth that price.  Look for a full review of the game at Co-Optimus soon!