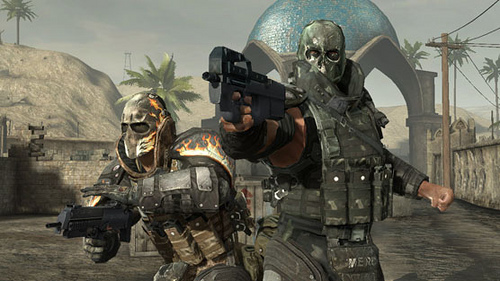 Senior producer Reid Schneider made a comment to PSW magazine staff that the first Army of Two game was an over-ambitious title, boasting vehicle sequences and boss fights that weren't really "grounded in reality".

According to Schneider, the team is aware of the hyper-cinematic nature of the first game, and are seeking to rectify their faults this time around.

We're trying to make something a little more grounded in reality. You're going to have waves of enemies and harder enemies to kill but the notion of boss fights... we did it a little bit in the first game but here we want to keep an air of credibility to the events.

I couldn't help but notice that the senior producer neglected to mention the outlandishly macho behavior of Rios and Salem... Hopefully, the team at EA Montreal will take note of this inspired comic strip and catch on  to the gaming crowd's thinly veiled reprehension.