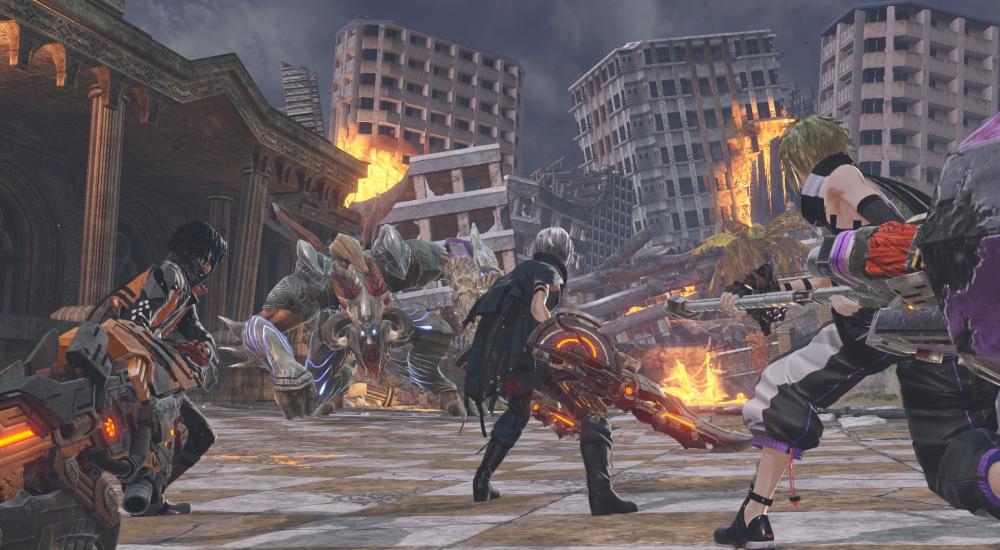 The latest entry in the God Eater franchise, God Eater 3, is something of a departure from the previous games. Bandai Namco changed the developer - Shift was responsible for the first two titles and Marvelous Inc, who worked on Soul Sacrifice, was brought on for this one - in order to "bring in a breath of fresh air" and rework many of the systems that they felt had become overly complex. The result is, in my opinion, the best God Eater game to date and the one that is the most approachable for newcomers (if you're ok with some anime).

The basic gameplay loop for God Eater 3 is the same as it's been for the other titles in the series: accept a mission, choose a melee weapon, gun, and bullets that have the same element as the weakness of the "Aragami" (the general name given to the monsters in God Eater) you're fighting, start the mission, fight until the thing is dead, get your rewards, craft a new weapon or upgrade an existing one, rinse and repeat.

It's a loop that is very similar to the games in the Monster Hunter series, but there are two key differences. First, you never have to track down the big monster. You know exactly where the Aragami is so you're free to make a beeline and start hacking away at it. While they will sometimes break off to try and heal up, the maps are small enough that you can catch up to them pretty quick. Second, the actual hacking and slashing of these foes is like a mix between Dynasty Warriors and Devil May Cry. While it tends to lean somewhat more towards the "button mashy" nature of the former, there are some combos you can do to get the most out of a weapon. It's also more responsive and feels quicker than most of the weapons in Monster Hunter.

The result of all that is, for the most part, God Eater 3 gets you in and out of a mission in less than 10 minutes. As you get more familiar with the game and the combat, and craft better weapons, that time will usually be bumped down to less than 5 minutes. It is a distillation of this particular style of action-RPG that is intent on trying to get players into as many fights with big monsters as possible, as quickly as possible. In doing so, the God Eater games slough of some of the other elements that often made Monster Hunter feel unapproachable.

That doesn't mean God Eater 3 doesn't have its own set of in-depth mechanics or complex systems (looking at you, Custom Bullet Editor), but most of those are focused around skills that alter your melee combos or give you some kind of boost, such as increased health or finding better materials from Aragami, so you can make "builds." These mechanics are doled out a little bit at a time across the first third of the game so it doesn't get to be too overwhelming, usually a couple missions after a concept is introduced you'll get a new one. Past God Eater games have done something similar, but in God Eater 3, many of these systems feel more focused around the idea of of customizing your melee combos to fit your particular style that it feels less complex and less in need of additional explanation. There are a number of changes between God Eater 2 and God Eater 3, and I won't be getting into the weeds with all of those, but I definitely found it easier to get into this game than previous titles.

One of the better improvements made to God Eater 3 was putting the "Co-Op Multiplayer" option into the "Terminal" where you choose your loadout for a mission (previously it was at the main game menu). It's available at the very start of the game on your very first tutorial mission so you and your friends can get a group together right away.

Getting a co-op session together is pretty easy, too. Hit up a Terminal, select "Co-Op Multiplayer," create a session, set a password (and room number if you want), and share that info with your friends. If you're not picky who you play with, then you can just search for sessions that match certain criteria, like requiring a minimum degree of story mission progress. It's quicker and easier to do than the hoops Monster Hunter: World required you to jump through.

Once you get a co-op game going, there are a few things to know/be aware of: After you've tackled all 60-ish story/optional missions, your co-op crew might be wondering what to do next. Outside of replaying missions in order to try and gather certain materials to upgrade a weapon, the new 8 player "Assault Missions" appear to be the equivalent of "endgame" content. These assignments pit you against particularly difficult Aragami that you have to bring down in just 5 minutes, which requires some pretty competent play to achieve. While you don't need a full group of 8 human players to launch these missions (computer-controlled NPCs will fill in empty spots), the fights are tough enough that you should have as many non-NPCs as possible. Unfortunately, outside of that, there isn't much else to do other than grind for materials to craft/upgrade your weapons of choice, or trying to get the ideal skills to install in those weapons from the random rewards you get when completing a mission. Granted, this isn't at all different from similar titles, but it also feels like there should be a little bit more.

There are certainly some downsides to God Eater 3 - such as the still complex "Custom Bullet" system, the generally lackluster story/characters, and a current lack of a compelling endgame - but the overall feeling to it is very solid. If you're a fan of the Monster Hunter style of action-RPGs and looking for a break from that until the big update drops this fall, God Eater 3 certainly works as a good stop-gap. If you've been interested in this style of action-RPGs but want something a little faster and a little more player-friendly, then this definitely fits the bill. Plus, the short missions make it ideal for getting in a quick co-op session with friends.