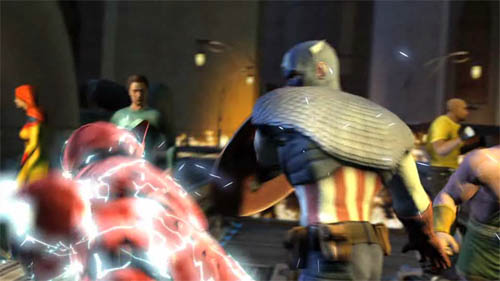 Yeah, yeah, I'm like a broken record.  My last entry for this column was for the same game, but what can you do?  I love super heroes, I love co-op, and I usually game with my 8 year old son, so Marvel Ultimate Alliance 2 is getting lots of playtime in our house.  We are nearly at the end of  our second replay, and I've been focusing on unlocking alternate costumes for many different characters.  The costumes are like the characters themselves: some are very nice, but some totally suck.  I'll let you know which are which. Matt Murdock is one of those heroes that just doesn't translate to game form very well.  Thor summons lightning, Storm casts tornados, the Human Torch shoots flames, and Daredevil... smacks enemies with a billy club.  Not impressive at all.  He seemed to die quite easily and couldn't really deal enough damage to keep up.

His alternate costume is emo'ed up a bit.  Or maybe it's a stealth version, who knows?  Granted, it's better than his original costume, which looks oddly pink in game.  I suppose it's better than the yellow monstrosity he wore for about half an hour back in the 60s, too. Now this guy, he's a powerhouse.  Playing on the harder difficulty levels, health management becomes a big issue.  Iron Fist has a regeneration ability, allowing him to heal the whole group for 75 points at a time.  Healing is invaluable in long fights!  No more worrying about saving those healing tokens for the optimum result.  He can also do a fair bit of damage to one target.

I didn't recognize Iron Fist's alternate costume.  I was totally hoping for the 80s style tights and rockin' slippers.  Alas, this costume is that of a previous member of the Iron Fist legacy.  Looks good! Cage is a very popular fellow in the Marvel Universe lately, and it's no surprise to see him in game.  Cage plays pretty much as you'd expect.  He's a powerful attacker, but is really best when used in a tank role, soaking up the damage.  He can even taunt opponents into attacking him, which is quite nice when things get rough.

His costume, though, is terrible.  He looks like one of the X-Men, not a street-savvy Avenger.  And is he 14 years old all of a sudden?  Look at that baby face.  The old school look would have been far more awesome: a groovytiara, shirt unbuttoned to his belly, an a CHAIN FOR A BELT!  Can you say EPIC? Storm was always one of my favorite characters in the X-Men Legends series and there's no change here.  Her biggest strength is crowd control.  A hail of ice can freeze enemies in place, or a burst of wind can knock them back, away from pounding on your teammates.  Of course chain lightning is always a good way to clear a room, too.  Storm is a very strong choice.

I know what you are thinking: I'm sad she isn't wearing a leather vest with a Mohawk like she ways back in the day, right?  Wrong.  Storm's alternate costume is a bit on the cheesecake side, but is quite elegant and regal as befits the current Queen of Wakanda. I have mixed feelings about young Bobby Drake.  His ice slide jump animation is one of the coolest (ahem) effects in the game, and he shares Storm's ability to freeze opponents, though it seems less reliable in Iceman's case.  (Seems like it should be the other way around to me.)  He has a bit of a glass jaw, though, and isn't a great damage dealer.  He was a fantastic character in previous games, sad to see he's just average in this one.

And then, there's his costume.  Iceman puts on black leather pants and a vest.  How exciting.  I'll take a snowman with black boots any day, thank you very much. Aunt Petunia's favorite nephew is a fun character, that is for sure.  Great defensively, he can take the damage as well as just about anyone, and give it right back without batting a blue eye.  And who doesn't love shouting "It's Clobberin' Time!", right?

But poor Thing always gets the shaft in the clothing department.  He's not stuck with the blue diaper of the old days, but he replaces his blue biker shorts with what is, in essence, an enormous onesie.  I don't care if you can bench press 85 tons, you  still look silly in a big onesie.

Of course, there are many more costumes we've yet to unlock, but these were definitely the most interesting so far.  I know I was pretty harsh on Marvel Ultimate Alliance 2  in my review, but the fact is, beating mindless hordes and creepy supervillains up with your favorite characters from the comics is a lot of fun, and covers the game's flaws to some extent.  I'm certain we'll keep playing until the last costume and final two characters (Jean Grey and Hulk) have been obtained.  When we find them, I'll let you know what we think!