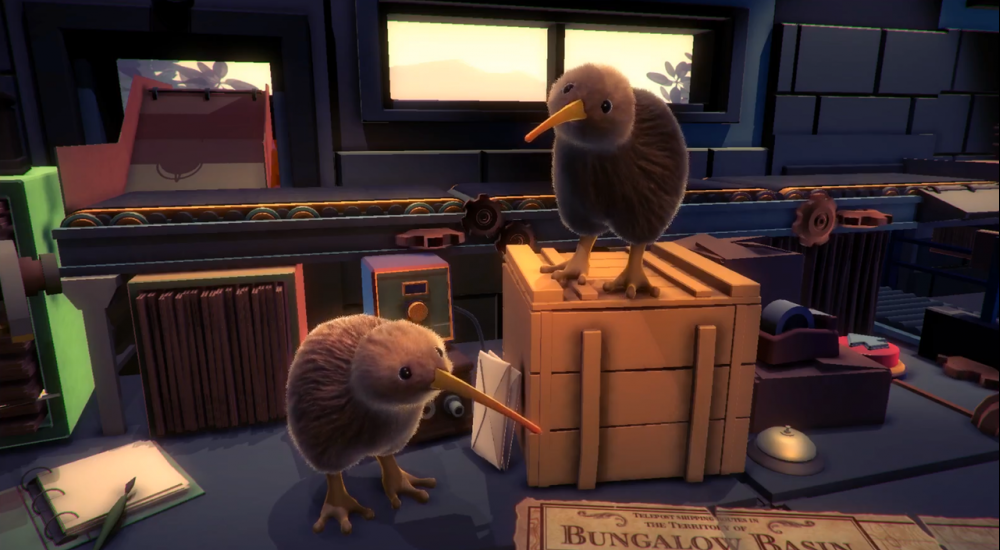 Ever wanted to a run a post office with a friend? Ok, but what if I told you you'd do it as a kiwi; interested now? I know I am. New developer Stonewheat & Son have a rather interesting puzzle platformer coming out sometime this year titled KeyWe, and the premise is just that: you and a buddy play as a couple of kiwi birds that have to sort and deliver mail for the fictional town of Bungalow Basin.

The basic gist is that you and a friend will play as the kiwis Jeff and Debra, and it's up to you to work all the various levers, buttons, and other contraptions in the local post office in order to get the mail where it's supposed to go. The title was first debuted last Fall during last year's Orlando Interactive Experience (OrlandoiX) conference, and it's made quite a bit of progress since then. The newest gameplay video shows off how the different in-game seasons might affect your work, such as a sudden power outage where you'll need to flip two breakers to get going again.

This looks like such a cute and fun game that I'm just watching the video over and over again to see the birds hop around. I'm also dying to know see all of the outfits you can put on them with that "Wardrobe" option; there's a little sneak peak at the end of the video, but I need more!

There's no release date given for the game just yet, and the only confirmed platform is PC and Mac. The devs are hoping to get it on additional platforms, i.e., PlayStation 4, Xbox One, and Switch (yes, please!), but nothing else has been announced/revealed on that front just yet. We'll be keeping an eye on this and providing more updates as we hear them.