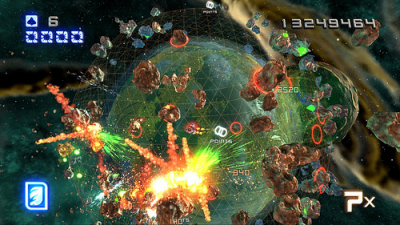 One game that was instantly a standout title for me on the Playstation 3 was Super Stardust HD.  It's a unique mix of Geometry Wars style action meets Asteroids boulder dodging.  The absolute best thing about the game was plugging in a second controller and blasting some baddies and rocks with a buddy.  One problem, it was sort of busted.

You see, in SS:HD your ship moves around a sphere that represents a planet.  You'll continually dodge and shoot asteroid pieces as well as enemies.  In the cooperative mode both players are tied to the same section of the sphere, so while normally the sphere would turn as you reach the edge of the screen, in co-op both players needed to go the same direction creating at most times a virtual stalemate of movement.

And now onto the point of this little post - the developers are fixing the problem.  In the upcoming "Team Pack" you'll a brand new versus mode as well as the updated co-op mode, plus a bunch of other goodies like improved graphics and an updated 5.1 surround sound soundtrack.  There will even be an included ship editor - all for the low low price of $5.   Now if they would only add an online mode!