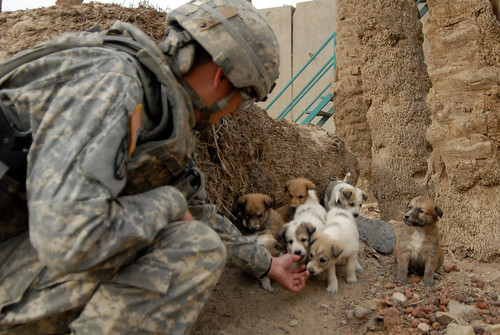 Last week when Konami announced Six Days in Fallujah, a tactical game set in the current war in Iraq, there was quite a bit of public outrage.  Members of several groups, including the British military spoke out publicly against the game.  "It's much too soon to start making video games about a war that's still going on, and an extremely flippant response to one of the most important events in modern history. " Said Tim Collins a former colonel, "It's particularly insensitive given what happened in Fallujah, and I will certainly oppose the release of this game."

Several anti-war groups also spoke out against the game, stating it was insensitive and it only fueled their anti-war efforts.  But despite these public opinions, G4 TV went to the source, the current soldiers themselves, to get their thoughts on Konami's game. Sgt. Casey J. McGeorge served three tours (36 months) in Iraq, and told me, "As a combat veteran and as a gamer, I have no problem whatsoever with the game...As long as it's made as realistically as possibly, I believe that this could be a good thing for both combat veterans and for the war in general."

It's good to hear that someone directly involved with the War in Iraq not only has an understanding of games, but has a level head when approaching the situation.  Other soldiers, like Sgt Kevin Smith, responded by saying they hope the game could help bolster support for the war, and while anti-war activists could use it as fuel, it could give civilians an insight into the situation over there.

"A lot of soldiers have had a hard time readjusting when they return from war, and this has caused an extremely high suicide rate," Smith said. "I really hope that this title receives positive press and encourages more empathy towards veterans after gamers have 'experienced' what they have gone through. On a side note, I really hope this game includes co-op!"

We bolded that last part for emphasis.  Even a good solider understands the need for cooperative gaming, especially in a title such as this.  We'll be keeping an eye out on Six Days in Fallujah in the coming weeks and months to see if that soldier's wish is fulfilled.