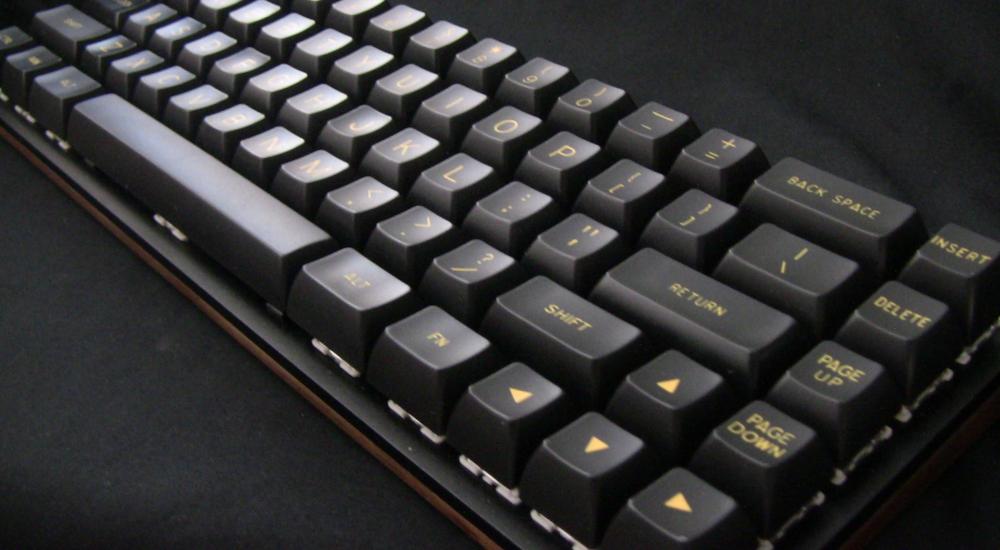 Let’s have a moment of transparency. I don’t write in a formal office nor do I play games in a special gaming room built and arranged for just such a purpose; both of these things can happen in coffee shops, at friends’ places, or, most often, at home. Knowing that my work, pleasure, and daily life may bleed into one another at any given moment has kept me aware of the aesthetic that my dedicated work/gaming/living space has, even when I’m not using it. To that end, Woo-dy delivers a sleek, very sharp-looking keyboard that adds a no-frills aesthetic to whatever area in which the work may be getting done.

Out of the box, you’ll get the Woo-dy 67 Keys RGB Mechanical Keyboard, a USB-C to USB-A cord, and a key removal tool that is typical for mechanical keyboards. The keyboard itself is good-looking; the underside is a sharp wood design that feels strong and smooth, and the sole USB-C port on the left side maintains the minimalistic aesthetic. I received a walnut version, but there is also a lighter, cherry wood version available for purchase if you prefer a different wood. Regardless of wood tone, once the keyboard is plugged in and powered on all 67 keys are backlit as waves of different colored light move across them by default.

I began typing away and was impressed with just how comfortable the keys are as the size has been carefully considered to allow for accurate finger strokes. Unfortunately, the excellently-sized keys present a minor problem as there are no lines on the “F” or “J” keys for your fingers to feel to assure you that you are resting your hands properly. The exchange here seems to be that the keys have such large, uppercase letters and numbers painted onto them that no visual confusion could ensue, but that is not consolation for touch-based typers or gamers that have become accustomed to “feeling” their place on the keyboard. It seems like an oversight to not at least provide alternate versions of the keys in the box so you could swap them out based on preference. I switched out the Woo-dy’s “F” and “J” keys with keys from a different mechanical keyboard and they still fit well and worked perfectly fine, but the prospect of buying something knowing I will have to alter it due to a design difference is never ideal. Regarding accommodations, the keyboard is ergonomically designed for comfortable long-session use. While the keyboard is set up at a comfortable angle that I was able to use for both writing and gaming for extended periods, there is no variability to that angle. There are no feet that can be extended to accommodate those who need or want different typing inclines. This may be because of the wood backing and aesthetic focus, but without the feet the only thing on the underside of your keyboard will be the small, rubber pads that stop it from sliding. This being known I moved into the nitty-gritty of my time: gaming.

The first game I tried out with the Wood-dy was the action-RPG Path of Exile. To the keyboard’s credit the keys here felt better than when I was typing, as the pressure of combat emphasized how wonderfully sized and spaced the keys are. I was able to keep my head in the game and my eyes locked on the screen, even with the aforementioned lack of tangible lines on the “F” and “J” keys. I continued to play through hours with friends and never felt my hands land anywhere other than exactly where I wanted them. Up until this point, I had been using the Woo-dy as a straightforward plug-and-play accessory for both laptop and desktop. However, the Woo-dy also boasts Bluetooth compatibility for devices, such as phones or tablets, and I was excited to give it a try. My experience with this feature, though, was plagued with issues.

There is no built-in battery on the keyboard itself, so you have to plug it in to something that will function as a battery pack before attempting to pair it with a device. Even after I connected it to an external power source I struggled to get the Bluetooth working at all. To put the keyboard into “pair mode,” you press the “Space” and “FN” keys. However there is no easily discernible light to indicate that Bluetooth is active, which lead me to constantly resetting the keyboard as I was unsure if I had successfully activated this mode or not. Once I was fairly sure I had turned it on, I tried to pair it with my phone, desktop, and laptop, but the keyboard remained undiscovered by both desktop and laptop, and it only found my phone after a long period of trial and resetting.

Woo-dy brags that users can pair up to three devices at one time, and each device can be mapped to a combination of buttons (FN Z, X, or C, for devices one, two, and three, respectively). This is easier said than done, however. The process, in full, is as follows: activate Bluetooth on whatever device you want to pair with, activate Bluetooth on Woo-dy, press and hold one of the three key combinations for three seconds, and you should be good. I say “should be good” because the keyboard does not tell you Bluetooth is on, nor does it give any indication that a device has been successfully mapped to a key combination; once you go through the process described above, you are left hoping that you completed it successfully. If you didn’t, then you get to try it all over again and hope for a different result the second time. It is wildly frustrating and made worse by the fact that it’s also an easily avoidable frustration had there been better indicators for it all. However, this was not the only irritation I experienced. While the Woo-dy is plug-and-play compatible and will work right out of the box, it does come with software that can change the backlighting color as well as alter a few key functions, such as pulling up email quickly or changing the volume on your connected device. I dove into the software in hopes of creating a numeric keypad as the Woo-dy does not have one, but soon found more issues. Without going into too much of the nitty-gritty details on the software side, the process ended up a failure; certain keys stopped working and soon the keyboard stopped acknowledging keystrokes altogether. I did a factory reset while in the software, but the non-typing continued and I had to unplug the keyboard then plug it back in to resolve the problem. As mentioned previously, the Woo-dy does just fine as a plug-and-play keyboard, but if you want to dive in and do some simple key remapping, it shouldn’t result in some sort of inhibiting meltdown.

One last quick difference with the Woo-dy compared to other keyboards is that the “insert”, “delete”, “page up”, and “page down” buttons are not in the usual location along the top row with the function keys (which are also missing). Rather, they are placed along the side of the keyboard just to the right of the “backspace” and “enter” keys. All of these choices are to keep the keyboard condensed and portable, as that is the core of this keyboard’s mission, but it led me to a question that highlights the biggest fault of this keyboard: what do I do with this now?

The Woo-dy is unquestionably pretty to look at, which is good and fine, but I don’t believe it addresses the actual usage of this particular piece of computer hardware. It technically works fine for games that don’t require a lot key commands, but for those that require a numeric keypad, such as Grand Theft Auto 5’s flight controls or Final Fantasy 7’s chocobo controls, I want those keys at my disposal rather than being forced to remap part of the keyboard using software that may or may not work. On the other end, when I have to write something, it doesn’t fit with my personal preferences. There is no right control (CTRL) button, which I personally find useful for activating italics and bold font while I go.

Further, assume for a moment that the Bluetooth does work perfectly. Now, suppose I take this keyboard with me, as it is intended, to a coffee shop or a meeting - do I take it with my laptop? I’d rather use my laptop keyboard as it saves space and doesn’t require me to plug in this additional hardware. Perhaps I would take this keyboard with my phone and use that to write word documents? That seems like an odd way to go about completing serious writing. The only middle ground I could suppose would be if you are the type of person who, on the go, would prefer to use a tablet rather than a laptop and you plan to tote some way to plug in the keyboard you want to use as the Bluetooth (again, assuming it actually works) still requires separate power. If this kind of person is you, please recall that the Woo-dy copy I received did not include a power brick so you will have to supply your own. The Woo-dy 67 Key Mechanical Keyboard attempts to sell itself on the sights, smells, and sounds of the thing itself, and across all of those measurements it is outstanding - this is a very aesthetically pleasing piece of equipment to use. However, whether I was at home, work, or anywhere in between, there never seemed to be a time that this keyboard felt like the solution it pitches itself to be. I had a better time gaming with a standard mechanical keyboard, and typed faster when I had my laptop keyboard and all of its keys. Pure aesthetic has its place, but the Woo-dy’s focus on that alone left me feeling like I was always at a loss when I chose to use it over my other options.