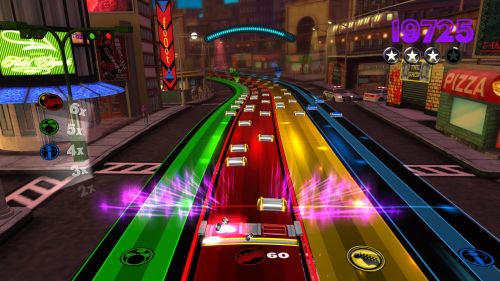 A new Rock Band game is on the way; apparently, reports of the death of the music game genre were greatly exaggerated. The latest entry into the series, though, is a drastic departure from form. You won't need any plastic instruments to play it, and, sadly, co-op is gone, as well.

Rock Band Blitz, as Harmonix's new game is called, won't be a full retail release, coming to XBLA and PSN. While it uses some of the icons and the basic gameplay of Rock Band, it has more in common with the company's earlier offerings, such as Amplitude. Instead of hitting a drum, or strumming in time with the notes, you'll press a button on a standard controller instead. The game has an arcade feel, with the goal being earning the highest possible score by switching between instrument tracks at the right time.

There are twenty five new songs in Rock Band Blitz, and, as with other games in the series, it's compatible with all your existing DLC. That's right, you can play your favorite downloaded or exported tracks from previous games in this one. It's a nice feature, one that Harmonix got right from the beginning, and it's good to see it still in use.

Dropping co-op gameplay, on the other hand, is a perplexing move. It seems like the game would still work with multiple players doing their best to keep the high scores flowing by. Alas, it's not to be. While it's nice to see the great Rock Band series keeping on, leaving out co-op is a bit of a head scratcher. Rock Band Blitz is scheduled to be released in the summer of this year,