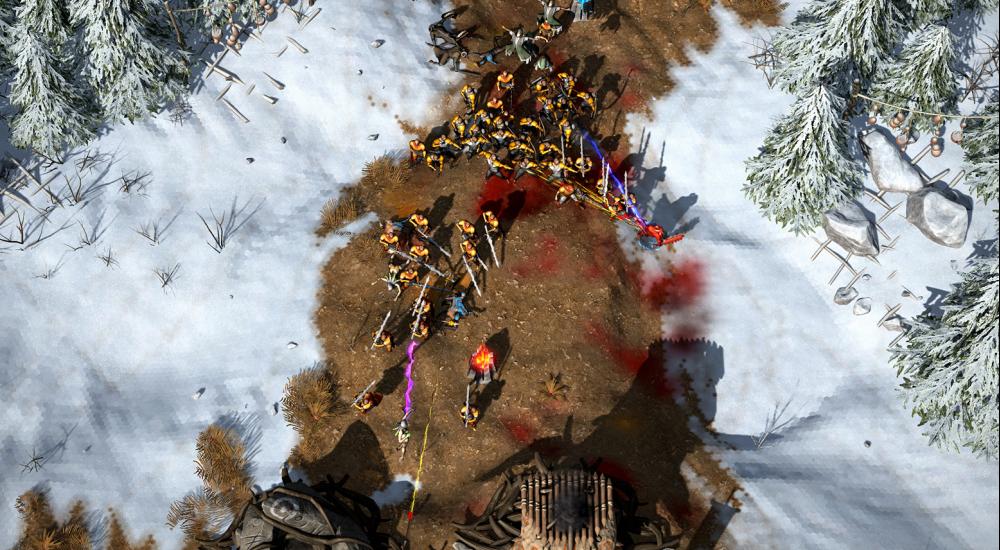 Tomorrow is a big day for Tower Five, an independent French developer that is comprised of a few former Creative Assembly folks. Their first title, Lornsword Winter Chronicle, will leave Early Access on Steam, and it will also be available on PlayStation 4 and Xbox One. The game is described as a "story-driven action strategy game" that supports drop-in/drop-out couch co-op; naturally, we were interested in learning a little more about it. Designer Renaud Charpentier took some time to talk with us about what players can expect from the game, and what influenced the co-op design.

Co-Optimus: Thanks for taking the time to speak with us about Lornsword Winter Chronicle. First off, would you mind introducing yourself and let us know your role in the game's development?

Renaud Charpentier: Hello, I am Renaud Charpentier, I designed Lornsword and wrote its story. Lornsword takes place in Fantasy world I have been using for several games along the years, both tabletop games and video games. Handling both the design and the story was challenging but it helped to achieve a consistent blend of gameplay and narration: you just have to agree with yourself, which is not always the case, but still simpler than herding an assembly of creative cats. At the start I knew which story I wanted to tell, so my early focus was more on the game design as it was a huge challenge: propose a strategy game that plays really well on consoles. The trick ended up using some action games concepts (controls, UI, camera...) to break the controller + RTS curse. Once the systems were fluid, I could focus a bit more on the progression structure of the game. Matthias Varlet helped me with the level design, which is always very important to maximize the potential of game systems. On this game it was really 50-50 between game system and level design, both equally impact the final experience.

Co-Optimus: Could you provide us with a brief summary of Lornsword Winter Chronicle; who are you in the game and what is the minute-to-minute gameplay like? Are there modes outside of the story campaign?

Renaud: Lornsword is a ride, it’s one story based campaign that should take you 20 to 30 hours, depending on your experience with strategy games. You are Corun Lan Ka, a Lornknight or the Lorn Empire initially dealing with an internal rebellion in the deserts of the wide south. This is where your story starts, this is how you discover the world, through this point of view, with all the prejudices and bias it involves. Then the story will bring you somewhere else, progressively, both geographically and mentally, this is how, you will start seeing this world through different points of view, through different lenses. Lornsword tries to be a mature tales, a complex world where things are not simply divided, where the question is not who is right or wrong, but rather who believes what and why. In terms of gameplay, you have direct control of Corun through the controller, left stick to move, right stick to control the view, buttons for key actions: sword attack, power, sprint and building. Press the right trigger and your closest warriors are going to start following you, press the left trigger and they will break formation to fight the closest enemy. One of the key strategic decisions is always how you are going to use your time. As you conduct both the fighting and the economy with the same character, you have to choose where you go and when: either to one of the front to fight there, either to your base to build or upgrade buildings or either somewhere else to explore to find resources: gold mines, farms and shrines. So your second to second actions are the precise control of your hero, running around this tower or slashing this precise enemy, or stepping precisely where you want to build this new fort. Then your minute to minute decisions are strategic: should I defend to the north, should I push this attack to the east or should I invest in defending this lonely mine to the south? Of course each battle, each map, is different, weighting these decisions with various geographies and objectives.

Co-Optimus: The title supports drop-in/drop-out two player couch co-op, what does the second player do? Are they able to take all the same actions as the first player?

Renaud: Yes, the second player controls Lassia, the Captain fighting alongside Corun in these wars. Lassia has the exact same prerogatives as Corun and this is where the trick is: you will have to cooperate to be efficient because you and your friend will share the same resources. It helps that being two of you can act in two different points of the battlefield, but it doesn’t help if one player burns all the gold reinforcing a farm to the west when the second was hoping to quickly spend it to upgrade temples in their main base... Collaboration is required to be efficient, which should be possible as both players are playing on the same screen, in the same room... most likely sitting in the same couch. It's a real drop in and drop out, so even if you started a battle 15 minutes ago, the second player can instantly drop in and help... can be a good way to beat maps in “hard” settings. Same for dropping out, if either player has to leave, they can do it instantly and the remaining player can finish the battle by himself. Co-Optimus: What are some of the benefits, other than the joy of comradery, you see in playing Lornsword cooperatively? Are there certain things that can only be done in co-op?

Renaud: A few achievements can only be done in co-op, but the key points are surely comradery, helping in general and discovery. You can choose the difficulty of most battles, between easy, medium and hard, but as always, this is very relative, medium for you might be hard for someone else, and vice versa. Playing co-op changes the difficulty in the sense that if you work well together, it will help in beating a map you find tough, so it can be used for that. Also, as you can have one player doing a lot and the second doing much less, it’s a good way to discover the game, a more experienced gamer can help someone else discover, learn and enjoy the game. There might be little brothers, there might even be couples where not both are skilled gamers and you might have a friend that is great at racing games but never touched an RPG or an RTS... co-op is perfect for these cases in having that assist.

Co-Optimus: Were there other strategy games that influenced you when you were designing the co-op for Lornsword?

Renaud: Several, yes, from playing Warcraft 3 in a team of 2, to coop turn by turn strategy games, like Civ. But as Lornsword controls are action based, that you focus on a specific acting character, that the second to second pacing is fast, it also draws from DOTA gameplay, when you team up in a lane or for a kill... The limit of split screen co-op, obviously, is that you have to be in the same room, but it’s also its beauty, it gives you the most direct, simple and fun communication possible with your partner. Co-Optimus: What's been one of your favorite co-op experiences in any game over the past year?

Renaud: That would be playing Lovers in Dangerous Spacetime with my daughters; for sure! It’s one of the few games where you can play co-op with 3 players on one screen at the same time, which is exactly what we needed. It’s also a great game for cooperation as everyone has to do his job well, both controlling the engine, the shield and the cannons... you can switch roles on the spot for a change, it’s fresh and the action is very readable... panic and chaos can quickly ensue which is great fun... well, a big thank you to the developers, they gave us hours of family fun.

Thanks to Renaud for talking the time to talk with us about Lornsword Winter Chronicle! You can check out the game on PC via Steam, or tomorrow on the PlayStation 4 or Xbox One.