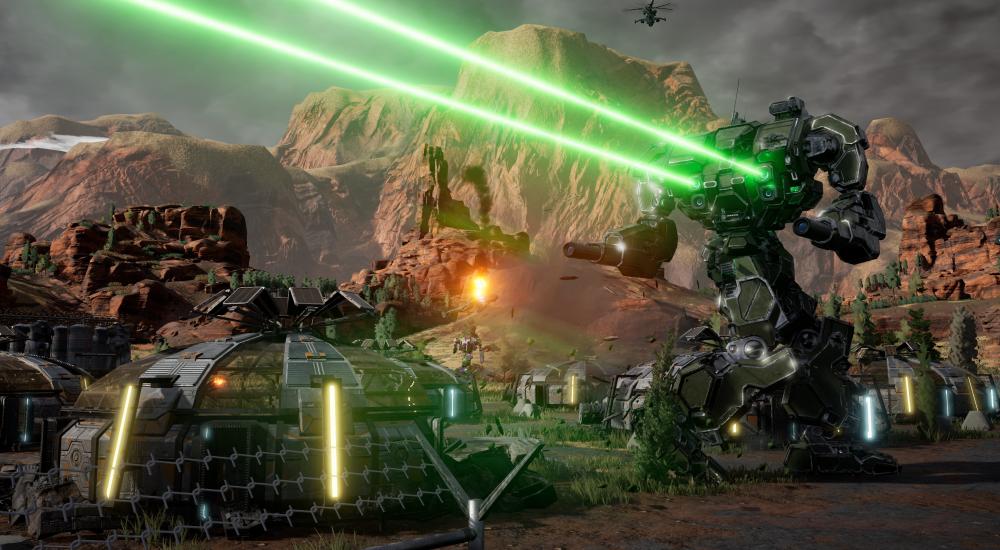 November 7th, 2002 was the last time a full fledged single-player and co-op MechWarrior experience was released. 17 years later we've finally been graced with MechWarrior 5: Mercenaries and the crew at Co-Optimus strapped in to our favorite metal beast for some good ol' metal-on-metal action.

MechWarrior 5: Mercenaries comes from developer Pirahana Games, makers of MechWarrior Online. Yes, they are no strangers to the IP so hopes were high they could translate the experience into something BattleTech fans have been craving. Did they deliver? Mostly...

The campaign delivers an experience not too far off of the 2018 RTS BattleTech game by Harebrained. You are put in charge of a group of mercenary MechWarriors and tasked with completing missions for C-Bills, building up your squad, and running a successful business. Along the way you'll need to purchase from the list of almost 50 available Mech's, upgrade, tweak, and balance their loadouts to complete one of the randomized missions, and of course minimize damages to maximize profits.

The gameplay itself caters to the simulation fans, not the 2002 MechAssault on Xbox fans. You are driving a walking tank; the torso moves independently from the body as you lumber through the battlefield with ever an eye on your heat level during combat and the skies for enemy choppers and dropships.

On the co-op side of the fence, MechWarrior 5: Mercenaries supports four player online co-op through instant action missions or via the one of the player's saved campaigns. In instant action you choose between various missions types like defense, assassination, or warzone, and the game randomizes the map and enemies based on your settings. It's highly replayable and incredibly fun to try out all the game's mechs at your disposal. If there's a downside, it's the lack of a feedback loop to a greater purpose - no experience, no money, and no unlocks.

The campaign will only benefit the host player (or penalize if your squadmates are sloppy). Again, the lack of a feedback loop to your own game is slightly disappointing and hopefully something we see rectified in a future patch. One final note, as this is a PvE game - the enemy AI and squadmate AI can be a bit...lacking. This can make it quite distracting and often frustrating.

All in all,  MechWarrior 5: Mercenaries offers a lot of what MechWarrior fans have been wanting, it's just not quite the total polished package we hoped for. Check out our co-op stream below to get a good idea for the feel and look of the game and let us know what you think in the comments.

During the first half of the stream while we are playing through the story campaign, Nick is the only one who can do anything at the base. For a game which has a ton of management (mechs, economy, pilots) it would be really nice to have your friends work on outfitting the mech they will be piloting. If you are just looking to do the Instant Action mode, this doesn't apply as everyone is in charge of their own mech but I wish this was the same in the campaign.

The other aspect of MechWarrior 5 I wanted to highlight was the sheer number of chassis included in the game. There are over 50 different mechs to choose from, and that isn't including all their variants. I had some heavy nostalgia, as it felt like I was picking through an old toy collection I found in the basement. I'm really excited to sink more time into the game and test out how each of the different mechs feel.

Despite being an action game, MechWarrior 5 is still a simulation game. Piloting takes practice and balancing heat and weapons systems is an art form only perfected with experience. This isn't a guns blazing shooter, but a tactical simulation game which is fairly crunchy; a characteristic throughout the series.

Despite my gripes about the user experience stuff in between missions, the most important quality here is that the mechs feel great. A light little Locust feels swift as it darts across the battlefield, spotting for the larger brutes bringing up the rear. An Atlas assault class mech lumbers across a city, collapsing buildings as it moves through the streets. Each of the weapons feels just right, from the lasers to the long range missles. As a long time fan and self proclaimed 'mech-head', Mercenaries is exactly what I wanted when it comes to an action game about giant bipedal tanks. However, those who don't have an invested interest in this universe may find it a bit overwhelming and tough to get into without some guidance.

Some common questions for Co-Op in MechWarrior 5: Mercenaries -