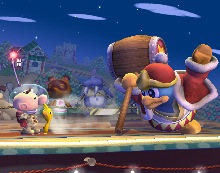 It's the culmination of just about every Nintendo franchise ever - as well as many classic characters from other games. And the best part? Super Smash Bros Brawl features cooperative play!  Sonic? Check.  Mario?  Check.  Solid Snake? Uh..check!

It's our first review of a Wii title, and it just may be hard to top it.  Read our full review to find out just how it stacks up.

And don't forget to leave a comment and let us know who your favorite character is!

The Co-Op Experience: The co-op mode allows you to play through the story part of the game with a friend.The online co-op is more challenge based. More info can be found hereSuper Smash Bros. Brawl is the next installment in the Smash Bros. series for the company's Wii console. Among the new characters playable in the game are Meta Knight, the sword-wielding nemesis of Kirby; Pit, the angelic archer from Kid Icarus; Zero Suit Samus, the powerful Metroid series heroine minus her versatile armor; and Wario, who demonstrates a noxious attack of gastronomic proportions. Also Snake, the gritty soldier from Konami's hugely popular Metal Gear series. [Nintendo]