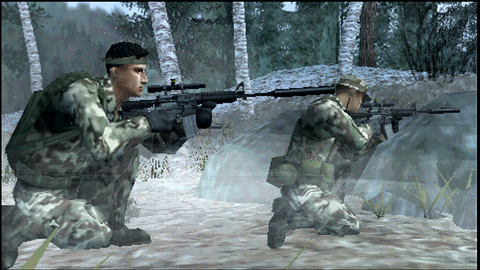 Could the timing be any better? Yesterday, our weekly This Week in Co-Op column went up, and featured the only SOCOM title to have a co-op mode.

Today, Slant Six games - who have apparently inherited the franchise completely - announced a new addition to the series, returning to the Playstation Portable and featuring a co-op campaign. SOCOM: Fireteam Bravo 3 is official!

Beyond the usual online competitive mode and the mention of co-op, details are scarce. Click "Read More" for another screenshot and the source link.

[UPDATE] - The new trailer is also posted after the break.

Join the ominous world of ex-secret operatives as you lead a covert operation to track and interrogate former KGB agent, Alexander Gozorov who is believed to be withholding information on a forthcoming attack with weapons of mass destruction. While the SOCOM name has long been synonymous with multiplayer tactical gaming, SOCOM: U.S. Navy SEALs Fireteam Bravo 3 takes it a step further allowing players to tackle missions with teamwork and firepower.