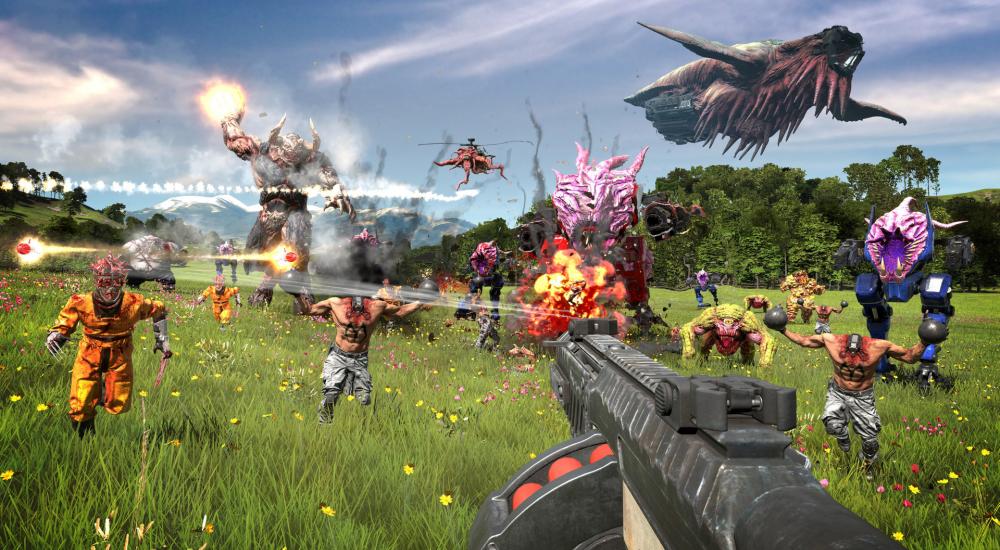 The Serious Sam series has been co-op friendly since the beginning, with the first game launching way back in 2001 challenging the likes of DOOM, Duke Nukem and QUAKE. Now the series has returned after several VR releases with a proper sequel simply called Serious Sam 4.

The big feature this time appears to be called The Legion system, part of Croteam's custom engine the game is built on. Legion allows the battlefield to contain "thousands of enemies" at a time. The series focus has always been about overwhelming you in combat with enemies, and this time it looks to push that to 11.

On the co-op side of things we've got full four player online co-op through the campaign and special "side missions" available as well.

The iconic cast of alien invaders returns with some new reinforcements! Fight your way through unbelievable numbers of Mental's minions including the iconic Headless Kamikaze, Beheaded Rocketeer, Kleer, Scrapjack, Werebull, and Khnum! Square off against brand new enemies and towering monsters like the frantic Processed, repulsive Belcher, the hard hitting Brute Zealot, and more.

Armed with a slew of devastating weapons, pick your tool for any situation. Lay waste to Mental's hordes using the powerful double-barreled shotgun, the punishing minigun, the powerful chainsaw launcher, a brand new auto shotgun, and the iconic cannon. Upgrade your toys, and enjoy the violent beauty of the lock-on rocket launcher, and the mighty laser beam of death.

Serious Sam 4 is set to release on Steam this August.