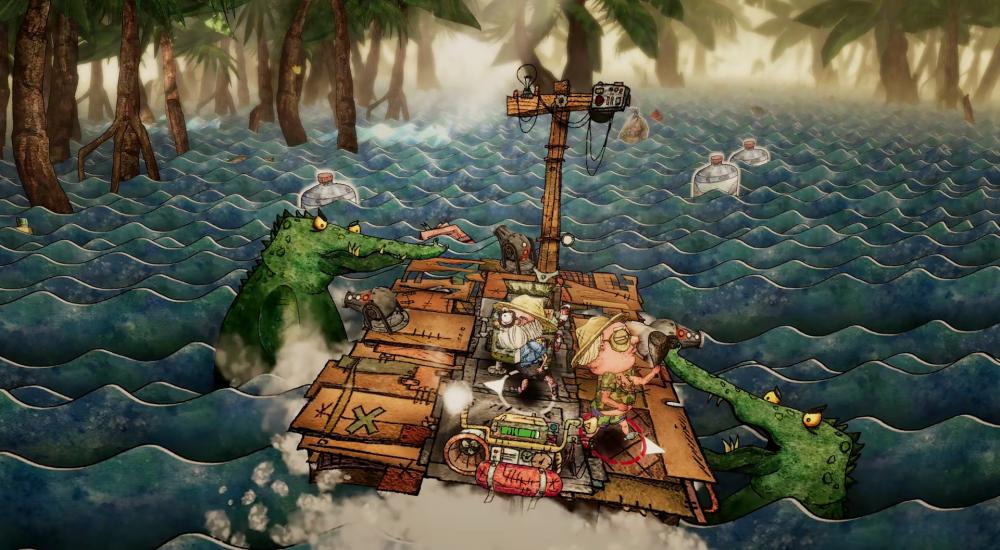 Plenty of co-op games have been revealed in this year's "E3-but-not" streams, but almost none of them focused on soaking your friends in sewage water.  Luckily, Trash Sailors has us covered.  The upcoming game from fluckyMachine and tinyBuild lets players collect and fling wet garbage to their hearts' content, sailing on a homemade raft all the while.

Trash Sailors sports its own unique, hand-drawn art style, which lends a certain charm to your smelly task.  Although the release trailer, shown below, is relatively brief, it does show off a few of your responsibilities while aboard the HMS Trash Compactor (at least, that's what I'm assuming it's called).  Survival is key, so while you'll be fending off alligators and other aquatic beasties in combat, you'll also need to gather floating garbage and mold it into slightly nicer garbage.

It's obviously too early to say whether the game will deliver on its promises, but I'm certainly intrigued by its aesthetic and unique premise.  The gameplay reminds me of another, slightly less trash-focused survival title called Raft, so I'm hoping Trash Sailors can do enough to set itself apart in that regard as well.

When it's released on PC later this year, Trash Sailors will support online and local co-op for up to four players.