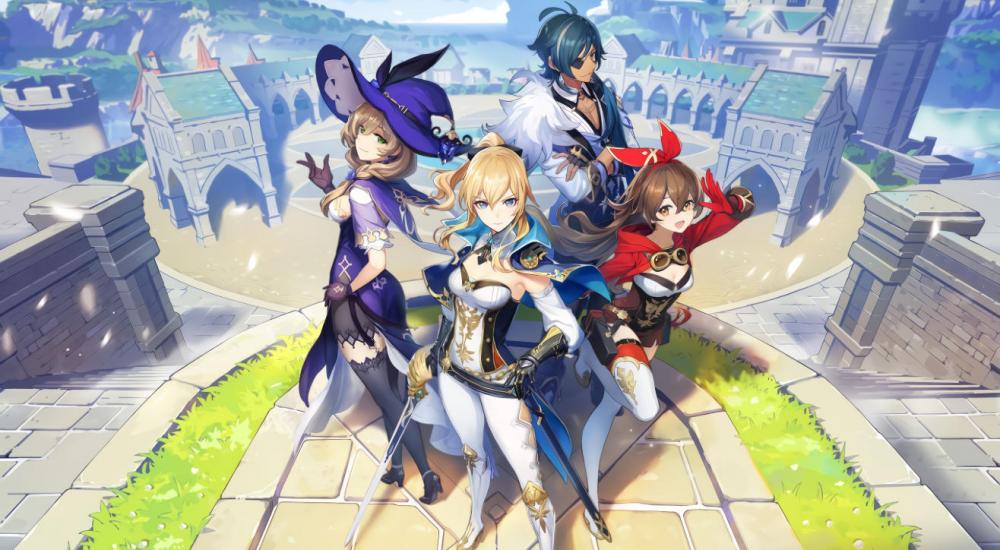 Two weeks after its release, Genshin Impact has made quite the impression in the gaming scene. The free-to-play, third-person action game draws a ton of inspiration from Legend of Zelda: Breath of the Wild as well as an elemental system that's reminsicent of the Divinity: Original Sin titles (i.e., combining two elements produces a new result). We spent a little time with the game's co-op and showed off what it has to offer, as well as its limitations.

An important warning before continuing to discuss the game further. Genshin Impact is a gachapon and, in this case, new characters and weapons are earned via "Wishes," which are randomized loot drops (loot boxes). The chances for new characters are shown in game and they are very low (a 5-star character is a 0.6% chance per wish). While you can earn the currency to obtain these Wishes by just playing the game (a few hours each day will just about get you one Wish), you can also purchase a premium currency that you can then convert into the free currency in order to get Wishes. Spending real world money on a random chance to obtain certain items is equivalent to gambling, though there is not even a chance for any kind of financial return in this instance. Games like Genshin thrive by preying upon players with addictive personalities and if you've ever felt that pull of, "well, maybe I'll just toss in another $10 to see what I get..." then avoid this game. It will happily take all your money and leave you with little but regrets. Even if you're not drawn in by the slot machine mechanic, there are a handful of other ways the game monetizes things (a Battle Pass, limited energy for certain loot) that can draw you in. Approach this game carefully.

As of the time of this writing, there are currently two big areas that are focused around two of the main elements, Wind (Anemo) and Earth (Geo). The initial story campaign will spend a lot of time introducing you to the various gameplay mechanics, such as gliding, combining elements, cooking, forging, and more, but progression through it is also limited by your "Adventure Rank," which can be thought of as a kind of overall "account level." You'll earn experience for your Adventure Rank through a variety of activities, like side quests, daily missions, and fighting world bosses. It's worth noting that your Adventure Rank is completely separate from individual character levels, and while the level of your characters will determine how easy a time you have with enemy encounters, your Adventure Rank will, ultimately, determine what activities to which you even have access.

Of particular importance for our discussion of things, the game's co-op is gated by your Adventure Rank; you'll have to get to Adventure Rank 16 before you can join other players' games, or they can join yours. I'd recommend that you just play through the first story campaign before worrying about playing with others; you'll get to the necessary rank by the time you're done with it as well as getting a few free characters (pro-tip: ignore tiered character lists and just play who you want to play) and a feel for the game on the whole. You'll also unlock most of what you can do with buddies in the game as, unfortunately, the co-op in Genshin Impact is limited.

It's easier to cover this stuff with lists than big chunks of text, so here are the limitations to the co-op:

Those last few items cut out a good chunk of what's currently in the game, so what can you do in co-op? Unfortunately, not much and what little there is to do requires the use of "Original Resin," which functions like the game's stamina/energy mechanic in that you have a limited amount (120) and you regenerate it over a period of time (about 15 hours to get it all back). As the amount of Resin required to get rewards from those activities varies between 20 - 60, your co-op sessions with friends will likely be very short. Here's the list of what you can currently do in co-op:

There is some fun in the co-op, though. When playing single-player, there is only one active member of your party of four at any given time and you have to swap between them. When you play with others, they bring their characters in and get to field them at the same time so it's possible to pull off elemental combinations faster/easier. Fighting the bosses with a buddy (or two or three) becomes a very different encounter than going it alone and you start to see some glimpses of the usual "holy trinity" of MMOs/RPGs where you have tank, DPS, and healer roles. Again, though, those opportunities are so limited that I wouldn't exactly count on it being a "co-op night" game for you and your friends.

Despite all of this, I've enjoyed the time I've spent with Genshin Impact thus far. There is something very compelling about the gameplay but it's also the kind of mindless experience where you can hop in, put a podcast or video on in the background, and knock out whatever daily stuff you want to do in an hour or two. Without any kind of "endgame" in place, it's hard to see exactly where it's headed right now beyond "grind for character/weapon/leveling materials," which I'm sure will only get worse as more does get added. For now, though, it's a good filler game until the big holiday releases.