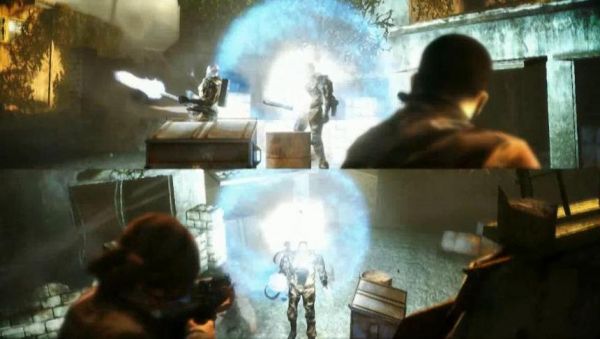 Upcoming movie tie-in third-person shooter and action game Terminator: Salvation has been under wraps for a while. Finally, we get to glimpse some more gameplay footage, and near the halfway mark, we are treated to a quick moment of splitscreen co-op.

The above screenshot was taken from the new trailer, and as you can see: two players are working from different angles to take down their targets. Whether this is a campaign mission or not can't be confirmed, although it's a safe bet. We've known about Terminator: Salvation's co-op for some time now, but this is our first eyes-on, and it looks...well...just like it should.

Hopefully, the second player can actually save their progress. Click "Read More" for the new trailer.